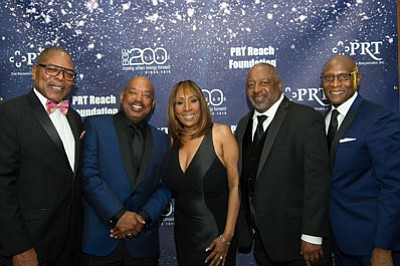 BALTIMORE — Among the primary goals in 2017 for The Presidents’ Roundtable is to accelerate the formation of entrepreneurial opportunities for the African-American community and to expand and diversify the business opportunities for corporations that currently make up the ambitious organization.

“[Goals include] starting in Baltimore and the Baltimore region, but then expanding nationally and internationally,” said Robert L. Wallace, a member of the Presidents’ Roundtable and CEO of the BITHGroup Technologies, Inc., a Charm City-based information technology services company that specializes in managed security services, health information systems, infrastructure IT services, wireless engineering, and biometrics.

Among goals for next year are, to structure and disseminate to the community the corporate knowledge of the organization’s family of companies so that the information and experience is readily available to other minority entrepreneurs and the community at-large, Wallace said.

The Presidents’ Roundtable (PRT), will also provide consultative input and services to the political and business leadership about how to effectively integrate African-American entrepreneurs and the community into the economic mainstream.

Further, the group wants to facilitate the formation and acceleration of strategic alliances and partnerships between PRT corporate members and the overall business community, according to Wallace.

Founded in 1983, the PRT consists of 21 African-American entrepreneurs in the Baltimore and Washington, D.C. region who employ more than 1,750 workers and oversee and control assets that exceed $1.1 billion.

B. Tyrous Addison of the Atlas Insurance Agency; Dorothy Brunson of Brunson Communications; Raymond V. Haysbert of Parks Sausage Company; and William March of March Funeral Homes are among the founding members.

In November, the PRT held its annual awards gala in Baltimore where it awards students in need from HBCUs in the region entrepreneurial scholarships.

“The organization has now awarded $80,000 in scholarships over the past three years to five HBCUs in the Washington, D.C. and Baltimore region,” Wallace said in an email. “We are committed to entrepreneurial education for students attending HBCUs in this region.”

Also, PRT’s Reach Foundation works in close collaboration with the leaders of PRT to promote social welfare and to improve the economic conditions of small and minority businesses, and the community at-large, Wallace said.

“PRT Reach Foundation supports education and encourages college students to become entrepreneurs,” he said. “PRT Reach seeks to achieve its goal through professional development activities, outreach programs and intellectual works that are not readily accessible from community and business advocacy groups, government agencies and others.”

For more information about the Presidents’ Roundtable and its future plans, visit www.presidentsroundtable.net.