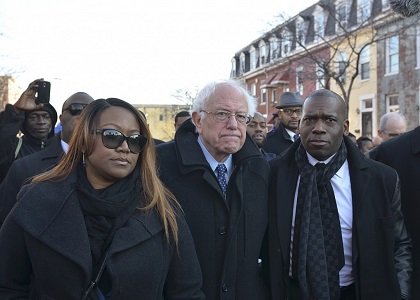 Hours after claiming a decisive victory over Hillary Clinton in the New Hampshire primary, Vermont Sen. Bernie Sanders is planning to meet in New York City with none other than the Rev. Al Sharpton, a move that is sure to rattle Clinton's advisors and the candidate herself.

Not because Sharpton directly controls a significant block of votes (he doesn't), but because he symbolizes a larger question facing the Democratic Party: what will African-American voters do when the first black president leaves the White House?

President Obama's popularity with black voters can't be overstated: his run for office resulted in millions of black voters registering and casting ballots for the first time in huge numbers in 2008. In 2012, when Obama was running for re-election, the rate of black voter turnout exceeded that for whites for the first time in history. Black voters skew Democratic by an overwhelming ratio of 80 to 11, according to the Pew Research Center, making blacks by far the most loyal demographic group in the Democratic base.

Any hope of a Democratic victory in November depends on heavy turnout by black voters. So it's smart politics for Clinton and Sanders to make as many friends among black political leaders as possible. And Sharpton -- who leads a national organization and hosts a daily three-hour radio talk show heard in dozens of markets around the nation -- is a good friend to have.

Like any power broker, Sharpton is well aware of his status. He recently told me of being approached by Clinton's allies and asked what he wanted in exchange for supporting her candidacy. "What do I want? Nothing!" he told me. "I've been to the White House for Christmas and the Super Bowl with the first black president, had more access than any civil rights leader in history. What can Hillary or any other president do for me?"

That's a pretty good question, and Team Clinton isn't the only one asking it. Sharpton was recently photographed having breakfast with Kevin Sheekey, a top aide to former New York City mayor Mike Bloomberg, a billionaire businessman who is known to be exploring a possible bid for president as an independent.

"It would be interesting. Bloomberg is one of the few people who could pull off a credible independent candidacy for president," Sharpton said after the meeting.

"For African-Americans and Latino voters, a 50-state run will enhance our leverage and get our interests addressed. We wouldn't just be focusing on a few primary states," he said.

The message is crystal clear: black political activists like Sharpton want to be wooed and are willing to talk with anybody -- including Bernie Sanders or Mike Bloomberg -- rather than fall in line behind the Democratic establishment candidate, Hillary Clinton.

In upcoming states with large numbers of black voters -- including South Carolina, Alabama, Georgia and Louisiana -- Clinton will need not just grudging acceptance but energetic mobilization if she wants to win. That is why she recently left the campaign trail to visit mostly-black Flint, Michigan, and decry the racially-tinged manmade health disaster there.

But Sanders' tete-a-tete with Sharpton makes clear that the black vote is not Clinton's to take for granted. She'll need to make more gestures like the trip to Flint and convince black political leaders -- not just Sharpton -- that the levels of access, pride, government appointments and other benefits won't vanish when Barack Obama gets on Air Force One for the last time.

Errol Louis is the host of "Inside City Hall," a nightly political show on NY1, a New York all-news channel. The opinions expressed in this commentary are solely those of the author.