In It to Win It – My Head Says Hilary, My Heart Says Bernie 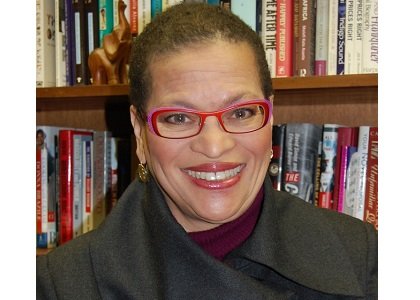 (NNPA) — I am looking forward to November 8, 2016, and to voting for Hilary Rodham Clinton to lead these United States. I am so extremely excited that a woman of character, experience, and discernment can lead our nation. Even as I look forward to the November vote, I am fully enjoying the path to November. Vermont Senator Bernie Sanders has provided tone and texture to this race. He has forced Senator Clinton to hone her positions on health care, Wall Street and income inequality. He came so amazingly close to toppling her in Iowa that it gave me Post Dramatic Stress Syndrome. She didn’t make my drama hers, though. She has managed, with stoic dignity, to stake her claim for this presidency.

My head is with Secretary Hilary Clinton, but my heart is with Senator Bernie Sanders. I realize that he has promised everything and hasn’t shared how he might pay for much of it — free tuition, universal health care, or Wall Street reform. Still, his energetic bluster has been a galvanizing factor in a race that might otherwise have been seen as a cakewalk or a coronation. Hilary needs to be pushed as hard as Senator Sanders can push her. And even though Sanders says he does not care about her “damn e-mails,” the e-mail conversation has to remind Senator Clinton that she has to figure out ways to restore trust among those who support her positions but look askance at the ways she has been too frequently presented.

There is an element of sexism in this. Hillary Clinton has been on the national stage for several decades, from the time when her husband, was elected governor of Arkansas in the 1980s. As First Lady, she had to juggle her smarts and her secondary role, blundering as she tried to offer clarity around health care, soaring as she provided rhetorical leadership on women and children’s issues. And since the Clintons left the White House, she has been nimble and focused as a Senator, managing to make friends in both political parties, and managing to provide solid international leadership as Secretary of State. Were she a man, would she be judged as harshly because some find her “unlikeable”? Would her every facial expression be parsed? Would opponents feel free to comment on her marital business? Thrice-married Donald Trump has spoken of Bill Clinton’s fidelity, but it is documented that he was a big time philanderer. Carly Fiorina says she would have left her husband if he’d cheated like Bill, but we don’t know that, do we? What we know is that Hillary’s gender is a double-edged sword. I cringe whenever she says, “I am woman,” or “the only woman,” or some reference to her clear self-evident gender. But I also cringe when the gender-bashers seem incapable of interpreting her words and her work fairly.

That’s not why I’ll vote for Hilary, though. I’ll vote for her because she is a center-left moderate (Bernie Sanders is not in charge of who gets to be a progressive, and I really don’t care as much about labels as about outcomes) who will pragmatically work toward social and economic justice. She isn’t perfect and may, indeed, be fundamentally flawed (as most politicians are), but she has been a consistent advocate for the least and the left out – for children and for elders. Is she weak on Wall Street reform? Absolutely. But as Bernie Sanders pushes her, she gets stronger.