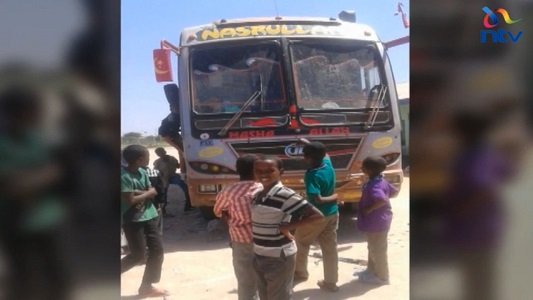 A group of Kenyan Muslims shielded the Christian passengers when Al-Shabaab militants amubushed a bus in Kneya. The Muslims told the attackers they were prepared to die together. The Muslim passengers who were mostly women told the Islamic militants to "kill them together, or leave them alone," witnesses told CNN affiliate NTV. (Photo: CNN)

CAPE TOWN, South Africa (CNN) — From rural settlements in the hinterlands of the African Savannah, to plush hotels in bustling metropolises, terror groups in sub-Saharan Africa are pursuing their fundamentalist agenda with deadly ambitions.

So deadly that the Global Terrorism Index -- which tracks terrorism trends across the world -- noted that Sub-Saharan Africa accounted for the highest number of deaths per attack than any other region of the world in 2014, nearly three times more than the Middle East and North Africa (MENA). This trend is likely to be repeated in 2015's report.

And the uptick in terrorism in the continent shows no sign of abating. This year has already seen al Qaeda in the Islamic Maghreb (AQIM), Al-Shabaab and the Isis-aligned Boko Haram, launch a number of mass casualty attacks within their expanding operational spheres. Few are immune from the violence which has targeted internally displaced camps, expatriate-laden hotels, military installations and popular beachfronts.

Who is to blame?

But what is fueling terror on the continent? Is it merely symptomatic of the global upsurge in terror groups seeking to displace democratic governance with an extremist variant of political Islam? Or could democracy itself be a catalyst for Africa-based terrorism?

The reality is that in many Sub-Saharan African states where terror groups are present, democracy exists in name alone. Governments embellishing themselves with multiparty elections, liberal constitutions, and other facades of democratic governance, preside over regimes which are political, socially and economically exclusive.

Take Mali for example. Since independence, the country's southern-based government has been able to monopolize political power by marginalizing ethno-political groupings residing in its desert north. This divisive governance system ultimately allowed groups such as AQIM and its various affiliates to take root in northern Mali where they remain steadfast despite attempts at dislodging them from the region.

Equally, these states wield violence in a manner which is often indistinguishable from that of terror groups. In Nigeria, which remains the focal point of the Boko Haram insurgency, Amnesty International accuses the country's military of gross human rights abuses which have included arbitrary detention, torture and extrajudicial killings. The government denies those allegations.

In many instances, state-sponsored violence has targeted communities already victimized by the Islamist sect. This has left thousands caught between two warring parties, both of which are seeking to instill a governance system underpinned by violence and fear.

Western intervention in these contexts may be further compounding the problem. Acknowledging the growing threat on the continent, Western powers are pledging logistical, financial and even operational support to Africa's terror-embattled states.

But foreign intervention risks evoking the unsavory legacies of colonialism and that of Western-branded counterterrorism initiatives elsewhere in the Muslim world -- both of which can assist terror groups in their radicalization and recruitment process.

Perhaps more importantly, by providing patronage to African regimes, Western governments may also be seen as facilitating exclusionary and oppressive governance, subsequently endorsing democratic rule as being defined as such.

The sad reality for many millions of Africans is that the antitheses of terrorism and democracy are not that dissimilar. For many, aligning themselves with their respective governments, or with a terrorist group challenging its legitimacy, may be a process of cost-benefit analysis -- a process which may not always culminate with support for the former.