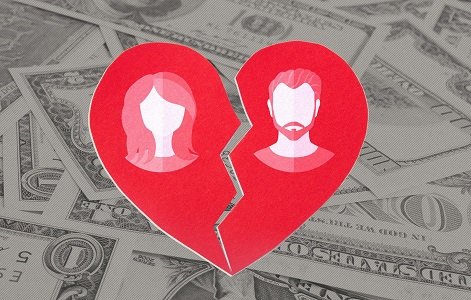 It's a common scenario: One person in a couple brings home a higher salary than the other, causing tension in the relationship. Money problems are often cited as a leading cause of divorce, and some experts say large differences in pay -- no matter who has the bigger paycheck -- can exacerbate these conflicts. Shutterstock/CNN Money

While the mystical cupid is shooting his arrow directly at the hearts of couples whose love seems blind on Valentine’s Day, some have called the day after the beginning of spats and even divorce.

A primary reason for that is money, according to multiple experts across different fields, including those skilled in financial management.

A recent PNC Wealth Management Survey may have the solution to keep couples from seeing red— during and after the lover’s holiday.

The survey, which questioned 901 couples, revealed that the majority of affluent couples rely on financial transparency and trust, and most financial tensions stem from contribution imbalance.

“The primary thing, from my perspective, would be to communicate and make sure that you have open communications,” said Sean Flynn, the investment director of Wealth Management at PNC.

“People who are in the best place in their relationship are the ones who relied on financial transparency and trust. Even if one person is ok with allowing the other to pay the bills and handle the finances, it’s important to have that other individual involved. He or she should be a part of the budgeting process, spending decisions and setting thresholds as to what dollar amount will be spent on certain items,” said Flynn, himself a newlywed.

For the survey, PNC commissioned a third party to identify attitudes about wealth from higher income individuals.

PNC found that financial transparency defines millionaire relationships as nearly six in 10 said they fully disclosed their financial situations before getting married or started to live with a partner. However, three in 10 did not discuss finances at all.

Further, the survey discovered that while only one in four couples said they argue over money those who do are more likely to be unequal contributors to the household finances and are less likely to have disclosed their finances before marriage or moving in together.

Of the 901 couples interviewed, 457 of them had $1 million or more available to invest and 150 had at least $5 million available to invest. However, the premise of the survey could also apply to those with little or no wealth, Flynn said.

“Absolutely it would,” he said. “I think the intent was to find people that were in a good place financially and try to identify what habits they might be employing. What we found was any amount of affluence doesn’t make people any happier or fight any less. In fact, it creates more problems.”

Problems can arise when one partner is entering the relationship with a lot of inherited money and the other has limited resources, according to Flynn.

A conversation is certainly needed and honest financial discussions can help, including one in which both parties fully disclose their holdings and even their credit reports.

The survey further revealed that 93 percent of the couples said premarital conversations about their financials proved helpful.

It also proved that the bliss of Valentine’s Day doesn’t have to morph into the misery of consternation on the morning after.

“For newer couples, hopefully they are in that blissful situation,” Flynn said. “In reality, any holiday can increase stress among couples if the issue underneath the surface comes up. Certainly, holidays like Valentine’s Day will bring issues to the surface and it is also has to do with the season because Christmas is over and it’s a new year and people are trying to buckle down and get their budget under control and they’re starting to plan forward.”