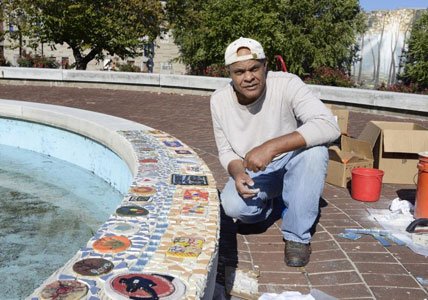 Self-taught artist and director of community engagement for Baltimore Clayworks, Herb Massie works on the mosaic on the fountain at the corner of Pennsylvania Avenue and Presstman Street in Baltimore City in partnership with the Living Legacy Foundation and Jubilee Arts. (Courtesy Photo)

When Herb Massie was growing up in Sandtown, he exhibited drawing talent at five years old and aspired to become an artist. Later in life, as a self-taught community artist he nurtured his passion while helping others. Massie, who is also the director of community engagement at Baltimore Clayworks, is primarily known for teaching art, creating mosaics, sculptures and clay forms and demonstrating his belief that art has a healing effect on people.

Massie was recently selected to receive the 2016 Sue Hess Maryland Arts Advocate of the Year Award by Maryland Citizens for the Arts (MCA)— a state arts advocacy group membership organization.

The award, which started in 2009, honors Sue Hess, who is the founder of MCA and the longest serving board member. Baltimore Clayworks is a Mt. Washington-based nonprofit ceramic arts center with a mission to develop, promote and sustain an artist-centered community.

Massie’s award will be presented to him during Maryland Arts Advocacy Day on February 17, 2017 at St. John’s College in Annapolis. Maryland Arts Day is reportedly the largest annual gathering of arts professionals in Maryland. Participants representing every county can connect with lawmakers from legislative districts to show support for the arts, discuss the importance of it and reinforce the economic impact.

“Just to be acknowledged— period— for the work that we do is gratifying enough, but to receive an award like this validates my day-to-day struggles with trying to bridge communities together, helping to create sustainable programming and giving a voice to communities,” Massie said. “It brings a lot of joy to me.”

Clay for All! Satellite studios are permanent Baltimore Clayworks program locations where Massie teaches art classes at partnering organizations. He can be found instructing people of varying ages at Jubilee Arts and seniors at the Zeta Center; teaching ex-offenders at the Tuerk House who are reentering society; and working with individuals who are recovering from addictions at Man Alive Lane Treatment Center.

Before working at Baltimore Clayworks, Massie created his own opportunities to get to where he is today. He knocked on doors to find avenues where he could gain professional art experience and make changes to improve the community. Massie volunteered to teach painting, drawing and clay work, after deciding to invest in art supplies.

“I’ve had several jobs, from cleaning floors to sitting at a desk, but I always continued to draw. I always continued to paint,” Massie said. “So I don’t know, about 20 plus years ago, I reflected on my life and I decided that if I was ever going to pursue my dream, I would have to make certain sacrifices.”

After giving back to community members at Baltimore City recreation centers, Massie developed an appealing lecturing and drawing style that contributed to his current ability to teach and connect with others effectively.

“I think that the thing that really stuck out with Herb is his absolute dedication to community engagement, and that’s a theme that we have really been sort of highlighting for the last year in terms of another role that arts organizations play in helping to stabilize and strengthen communities,” John Schratwieser, executive director of MCA said. “The whole purpose [of the Sue Hess Maryland Arts Advocate of the Year Award] is to

acknowledge somebody who is really doing great work, sort of promoting and advocating for the arts and the role the arts play in [the] quality of life and economic vitality of the state.”

Schratwieser also said that this year marks the largest number of nominees who were considered for the award. A committee reviewed 16 nominations then rated each applicants’ impact and reach.

Sarah McCann, executive director at Baltimore Clayworks, nominated Massie for the Sue Hess Maryland Arts Advocate of the Year Award. After knowing him for eight years, she observed Massie’s impact and ability to inspire others within local communities on numerous occasions.