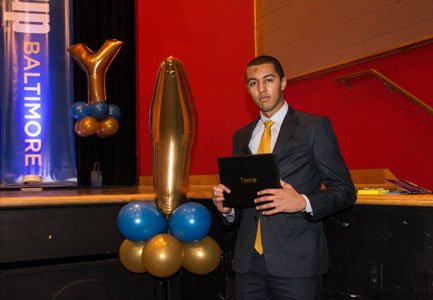 Tyson Lin was among 19 members of the Year Up Class of January 2016— Cohort 9— who graduated on January 29, 2016. Year Up is a national program founded by Gerald Chertavian in 2000 with the goal of “bridging the opportunity divide” by providing urban young adults sidelined by socioeconomic inequities the support, skills and experience needed to reach their potential. The program is hosted by BCCC in Baltimore. (Photo: Keaton Ottley)

Tyson Lin didn’t exactly know what he wanted to do with his life after finishing high school in 2014.

Lin, 19, wasn’t sure if he would be able to pay for college, or even if he wanted to enroll right away. He took a job at a clothing store shortly after graduating but became annoyed by his own complacency.

Lin’s sister suggested he apply to Year Up Professional Training Corps Baltimore based at Baltimore City Community College (BCCC). He was skeptical at first: The idea of receiving free training that can lead directly to good employment— essentially, being paid to attend class— seemed too good to be true. Nevertheless, Lin applied.

Fast forward a year later and Lin now works full time as an operations engineer for AOL. He intends to continue his college education this summer. Lin is glad he joined Year Up.

“The [Year Up] staff really knows what works. They’re committed to helping us become better professionals, better people,” he said. “They really want the best for you.”

Lin was among 19 members of the Year Up Class of January 2016— Cohort 9— who graduated on January 29, 2016. Keynote speaker at commencement, OneBaltimore chair Michael E. Cryor, delivered what Year Up Baltimore executive director Roland R. Selby Jr. called “a powerful message— uplifting and encouraging for our students.”

The ceremony culminated an intensive, yearlong program during which underserved but highly motivated young adults, ages 18-24, are groomed for meaningful careers at reputable companies and get a jump start on their college education— all at no cost to them.

Year Up was founded by former technology entrepreneur and Wall Street banker Gerald Chertavian in 2000 with the goal of “bridging the opportunity divide,” by providing urban young adults sidelined by socioeconomic inequities the support, skills and experience needed to reach their potential.

Year Up participants must have a high school diploma or GED. For the first six months, students learn employability skills in a classroom setting. Over the next six months, they complete internships with a Year Up corporate partner. Students earn college credits and stipends during both phases of the program.

Eighty-seven percent of Year Up participants in Baltimore are Baltimore City residents, recruited from a pipeline of area social service and neighborhood organizations, high schools and the Mayor’s Office of Employment Development. They have access to the same resources as any other student of the college.

“We’re not just given internships. We have to earn them,” said Alexus Martin, 18, a member of the Year Up Baltimore Cohort 10, which will graduate next year. “It’s all part of the high-expectation, high-support system Year Up uses to shape students into sought-after professionals.”

“We want to give them the tools to succeed and get them to understand this is a continual process. When you enroll in Year Up, the expectation is you will begin working after completing the program and continue to pursue an education,” Selby said.

Nationally, 85 percent of Year Up students are either employed or attending school full time within four months of graduating. Seventy-five percent of Year Up Baltimore students complete the program each year, and many of them land jobs. Other January 2016 graduates have IT jobs at Johns Hopkins Hospital, CareFirst, and Maxim Healthcare Services, among other companies.