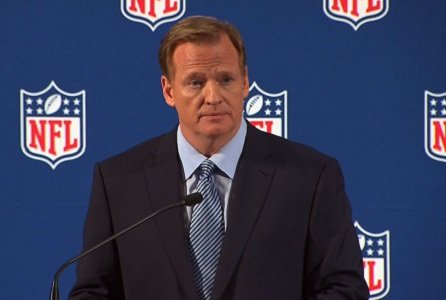 But with a salary of $34.1 million, he still earned more than all but one NFL player.

Only Atlanta quarterback Matt Ryan took home more that season -- $36.5 million, thanks to a huge signing bonus, according to salary tracker Spotrac.

Goodell came under fire during 2014-15 over how he handled the league's domestic violence cases.

He admitted he made a mistake when he originally gave a two-game suspension to Baltimore Raven Ray Rice during the 2014 season after a video showed Rice dragging his unconscious fiance out of a casino elevator. When another video surface showing him knocking her out, even some sponsors criticized him. But he weathered the storm.

Overall, he has been paid $174.1 million by the league in the seven seasons for which data is available, far more than any player received in the same period.

The pay for the commissioners of other sports leagues isn't disclosed.

The NFL has to disclose Goodell's pay because during the 2014-15 season it still operated as a not-for-profit organization, dispersing profits to the league's 32 teams rather than keeping the money itself.

But last year the league decided to end its not-for-profit status, which means it won't have to disclose commissioner pay.

Goodell has helped the league and its owners achieve tremendous financial success, making the NFL by far the most profitable sports league in the world.

The NFL likely had revenue of more than $12 billion in the 2014-15 season, according to a CNNMoney analysis of publicly disclosed data, up 16% thanks to new TV rights deals, more sponsorship revenue and higher ticket sales.

Sales will continue to grow thanks to a new rights deal the league just reached with NBC and CBS to show Thursday night games.