Pope suggests contraceptives could be used to slow spread of Zika

Avoiding pregnancy is not an absolute evil," the Pope says 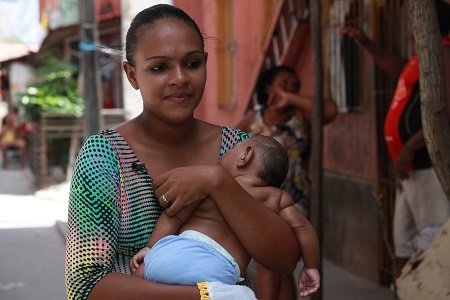 Oxitec -- a subsidiary of the biotech firm Intrexon -- is working to control the mosquito-borne Zika virus outbreak in Brazil with its genetically modified mosquitoes. Rafela Santos is seen here holding her son Luiz Felipe. Her son was born with microcephaly. (Photo: Miguel Castro)

(CNN) — Pope Francis indicated contraceptives may be used to prevent the spread of the Zika virus, despite the church's longstanding ban on most forms of birth control.

His comments may cheer health officials in Latin America but are likely to upset conservative Catholics.

At a press conference aboard a flight from Mexico to Rome on Thursday, the Pope was asked if the church should consider contraception the "lesser of two evils" compared with the possibility of women aborting fetuses infected with Zika. The virus has been linked to an incurable and often devastating neurological birth defect.

The Pope answered by calling abortion an "absolute evil" and Pope Francis indicated contraceptives may be used to prevent the spread of the Zika virus, despite the church's longstanding ban on most forms of birth control.a "crime."

"It is to kill someone in order to save another. This is what the Mafia does," Francis said. "On the other hand, avoiding pregnancy is not an absolute evil."

"In certain cases ... such as the one I mentioned of Blessed Paul VI, it was clear," the Pope said. It was Paul VI who wrote "Humanae Vitae," the papal document that solidified the church's stance against almost every form of birth control in 1968. The church does allow natural family planning, which involves a woman monitoring her basal body temperature and vaginal secretions to avoid having sex at fertile times of the month.

It's not entirely clear what the chances are that a pregnant woman who contracts Zika will have a baby with microcephaly. Babies with the defect have small heads and abnormal brain growth and often have developmental delays, seizures, problems with movement and speech and other issues.

On Thursday, the World Health Organization called for access to emergency contraception and counseling for women who "have had unprotected sex and do not wish to become pregnant because of concern with infection with Zika virus."

But the Catholic catechism states that aside from natural family planning, anything that works to "'render procreation impossible' is intrinsically evil." The church's teachings have put women in Latin America, where a majority of people are Catholic, in a difficult situation.

In December, authorities in Brazil urged women not to get pregnant. Then last month came the warning from Colombia to delay pregnancy until July. Then in an interview, a health official in El Salvador recommended that women "try to avoid getting pregnant this year and the next."

But the Rev. Frank Pavone, national director of Priests for Life, has said that birth control is wrong, no matter what. "That prohibition doesn't change based on circumstances," he said. "So couples have a responsibility to live according to the church's teachings in whatever circumstances they find themselves."

Other priests don't see it that way.

"The polemical approach, that contraception is devious or demonic in origin or the smoke of Satan, may ultimately not be the best pastoral approach," said the Rev. James Bretzke, a professor of theology at Boston College.

He said in the face of such consequences -- in this case, a baby who could suffer greatly -- he thinks the church might not be so hard-line, especially under the leadership of Pope Francis, who has taken a more merciful stance on many social issues from abortion to homosexuality and is himself from South America, where Zika has taken such a heavy toll.

"In Catholic Church teaching, some would say it would be acceptable to try to prevent conception in cases like this," Bretzke said.

As in the United States, many Catholics in Latin America don't follow the church's advice on birth control anyway. According to a survey by the Spanish-language television network Univision, 88% of Mexicans, 91% of Colombians and 93% of Brazilians support the use of contraceptives.