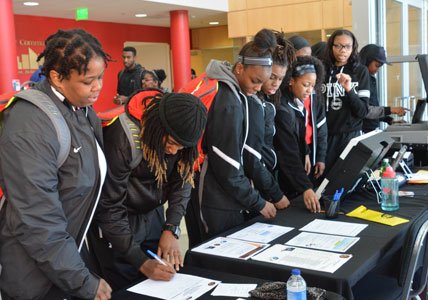 Since 2008, Baltimore City Community College (BCCC), through its partnership with the local chapter of the League of Women Voters, has registered more than 2,500 voters (and counting) through on-campus voter registration drives held during the school year.

With the onset of the 2016 presidential and mayoral elections, the BCCC is busy ramping up its effort to register more student voters and familiarize them with the new process for casting ballots on Election Day.

BCCC hosted a voter registration drive on February 2, 2016, which gave students and others an opportunity to test out Maryland's newly revamped voting system, presently being converted from touch-screen equipment to machines that produce verifiable paper records. The event was held in conjunction with the Baltimore City Board of Elections.

“It’s very different, more than I was expecting,” Kelvin Howard, 20, one of a number of BCCC student-athletes who visited voter information tables in the Student Atrium, said of the new voting equipment. “I thought it was going to be a simple pen-and-paper-and-scanning process. It’s something new and modern. It’s really cool.”

During early voting, according to the State Board of Elections website, all voters will use a ballot marking device similar to the touch screen machines Marylanders have used in recent years. The device prints voters’ selections onto a paper ballot card. Voters will then review their ballots and insert them into a tabulation device. The ballots will automatically drop into a secure ballot box. Come Election Day, voters will have multiple options to choose from. Some voters, including those with disabilities, will use ballot- marking devices to mark and print their ballots; others will mark pre-printed paper ballots by hand.

“The new system does give people the reassurance of having a paper copy of their votes,” said Lois Hybl, a League volunteer. “It is a learning process, but the Board of Elections has been doing a good job of showing how it works.”

The new voting machine demonstation at BCCC was one of eight planned by the Baltimore City Board of Elections. The effort presented a perfect opportunity for the College to recruit more young voters.

The College and the League will hold another voter registration drive at the Liberty campus in March.