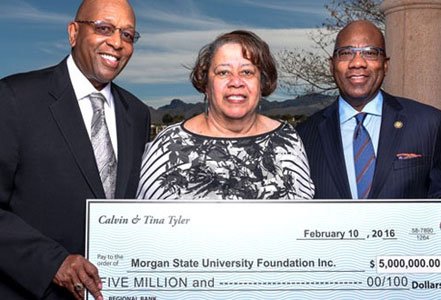 When he attended Morgan State University decades ago, circumstances were such that Calvin E. Tyler Jr. couldn’t afford to stay in school.

On Wednesday, February 10, 2016, Tyler and his wife Tina gave the school the largest individual donation in the institution’s nearly 150-year history.

The Tyler’s have pledged $5 million to endow a scholarship fund that initially will fund 10 need-based scholarships to cover full tuition for Morgan students from the city of Baltimore, their hometown. The scholarship can be renewed each year and it will be offered to incoming freshman with at least a 2.5 grade point average.

“We just wanted to help the kids who may not be able to attend college without these scholarships,” Calvin Tyler said. “My wife and I both came from a very humble background and we understand the challenges a lot of young people face when their families don’t have the resources.”

Born in West Baltimore, Tyler attended the historically black university in the 1960s but left because he didn’t have enough money to finish school.

He took a job as a driver for UPS and thus began a spectacular rise to become the senior vice president of operations for the delivery company where he worked until retiring in 1998. Tyler now serves on the board of directors of the company.

“I went to work and took courses here and there but I never finished,” Tyler said. “I wish I would have stayed in school and earned my degree but I received most of my education on the job and I try to tell young people that there’s a lot to be learned after college. If you stop learning, you are dead.”

This gift isn’t the first time that the Tylers have donated to MSU, which in 2004 bestowed upon Tyler an honorary doctorate degree. In 2002, the Tylers gave MSU $500,000 to establish a scholarship fund and in 2005 they followed that up with another $500,000. Then, in 2008, the couple gave another $1 million to the university.

The one thing that I believe is important is that young people graduate debt free,” said Tyler, who now lives in Nevada with his wife. The couple has two children and two grandchildren.

“Tina and I have never had debt and the main message we’d like to deliver with this donation to Morgan State is that young people should do everything that they can to live within their means,” Tyler said. “We’ve lived within our means all of our life and that helped us to avoid debt which I call economic handcuffs.” Incurring debt while in school only serves to ensure that students will get off to a bad start financially after graduation, according to Tyler.

Not only is the Tyler’s gift the biggest in MSU’s illustrious history, officials at the school say it’s one of the largest ever to any HBCU.

Calvin Tyler credits former MSU President Earl S. Richardson with helping the school achieve what he called greatness which encouraged him and Tina Tyler to donate to the university.

“I had a good relationship with Dr. Richardson and he told us of the plight of many in Baltimore who were academically qualified but lacked the resources,” Tyler said. “So, Tina and I wanted to do something for the young people in our hometown.”

Current President David Wilson said he was obviously delighted by the Tyler’s gift.

“I have received hundreds of emails from students wanting to come to Morgan or even to stay in school while they were enrolled at Morgan, but they simply did not have the money,” Wilson said. “What Calvin and Tina Tyler are doing is removing the financial barrier that stands in the way of so many young people in Baltimore in getting a college degree.”