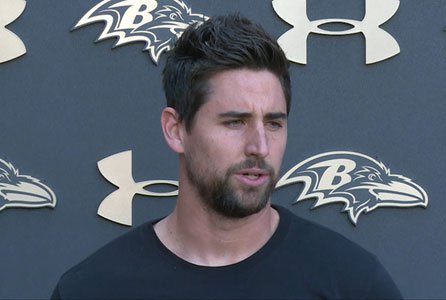 Ravens tight end Dennis Pitta speaking to the media at the Under Armour Performance Center in Owings Mills, Maryland on November 21, 2015, when he announced that he would not play during the 2015 season. (Photo: Turron Davenport)

Baltimore Ravens tight end Dennis Pitta loves the game of football so much that he is set to make another comeback attempt after suffering two devastating hip injuries. He didn’t play last season as he continued to work his way back from a dislocated hip.

Pitta dislocated the same hip twice in the last two seasons he played. His comeback was cut short last season and he was placed on season ending injured reserve November 11, 2015. The Ravens reported that doctors informed Pitta that it was not safe for him to continue his career. That did not deter him from his goal of stepping on the football field once again.

The Ravens signed Pitta to a five-year contract worth $32 million prior to the 2014 season. He will make $7.2 million this season. The Ravens have also invested multiple draft picks into the tight end position.

Baltimore selected Crockett Gillmore in the third round of the 2014 draft. The Ravens used a second round pick on Maxx Williams along with a fifth round pick on Nick Boyle in 2015. Pitta has helped the young tight ends get acclimated to the NFL and is impressed with how they are progressing.

“I’ve been in meetings all year and done everything I can to help them. I’ve tried to be a presence in the room that they know they could come and ask me whatever,” Pitta said. “It’s a great group of tight ends— certainly a lot of promise moving forward. I’m excited for that group and what they’re capable of.”

As for the status of his comeback, Pitta says that he feels good because of how he has been rehabbing and working out just as he did during the regular season. He said that he wants to continue playing and most importantly, be a part of the team.

There is no timetable set for Pitta’s return. His journey will continue to have a series of checkpoints and according to Pitta, they will continue gauge how the rehab is progressing. The major test will come if he is able to get back onto the field.

“I feel good physically, and I feel like I could go out and run and all that,” Pitta said. “On the field is the most effective way to [evaluate], whether that’s running routes on air or whatever it may be. I’ll do all what I can to put stress on it [and] test it the best way that I can.”

Pitta will have a big decision to make, as the season gets closer. He took part in OTAs last year and mini camp only to find out that he was not yet ready to return. Maybe things will be different for the veteran this season.

The doctors have already told him that he is likely to need a hip replacement in the future. Pitta is aware of the fact that he needs to have an eye on the long-term future as he attempts to make his way back onto the field.

“It’d be naïve to think that life after football is a reality. At some point, we all move on from the game of football,” Pitta said. “Hopefully, it’s not that soon for me, but if it is, I’ve certainly had to think about it and put some thought into it.”