Crews: "It affected everything. My wife was literally like, 'I don't know you anymore' " 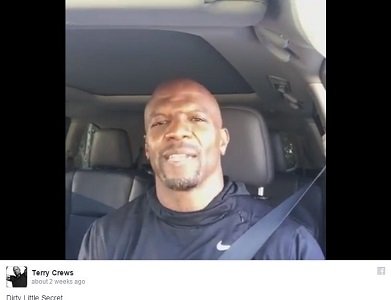 Actor Terry Crews is opens up about his addiction to pornography, which he says "really, really messed up my life." (Photo:Terry Crews/Facebook)

(CNN) — "Brooklyn Nine-Nine" actor Terry Crews is opening up about his addiction to pornography, which he says "really, really messed up my life."

In a new series of videos posted to Facebook, the former NFL player says he had to go to rehab for his addiction, which consumed him and threatened his marriage.

"Some people say, 'Hey, man ... you can't really be addicted to pornography.' But I'm gonna tell you something: If day turns into night and you are still watching, you probably have got a problem. And that was me," he said.

A video of actor Terry Crews discussing his pornography addiction has gone viral.

"It changes the way you think about people. People become objects. People become body parts; they become things to be used rather than people to be loved."

"Thank you so much for this message, Terry. Your honesty humbles me," said one man on Facebook. "I don't smoke, I don't drink, I don't do drugs. But I have wrestled for years - YEARS - with pornography. I am grateful today to say that I have a very specific sobriety date and I have stayed clean for some time now. I work at it every day and I do everything I can to remove its power and hold."

"Thanks for putting this out there and congratulations on finding recovery," said a female commenter. "This horrible plague killed my marriage. Glad you decided to fight. We need more voices bringing awareness. There is a silent war being fought and the casualties are families and relationships."

Crews posted two more videos thanking fans for their support and trying to answer their questions.

"Women, you need to be fearless. You need to confront your man about this problem," he said in the second clip, recorded while he drove around Los Angeles in a convertible. "You cannot accept any pornography in your life."

"Every time I watched it, I was walled off. It was like another brick that came between me and my wife. And the truth is, everything you need for intimacy is in your (partner)."

Rebecca King Crews has not referenced her husband's addiction in any of her recent social media posts. She posted a photo of her and Crews on Instagram last week with the caption "Love my boo!"

Crews, 47, played for six years in the NFL in the 1990s before launching a career as an actor. He has appeared in dozen of movies, including "White Chicks," "Bridesmaids" and "The Expendables" and its sequels. He also had a recurring role on the TV series "Everybody Hates Chris" and has been featured in several Old Spice commercials.

Last year, Crews made headlines when he said he and his wife had completed a 90-day "sex fast" that left them "more in love."