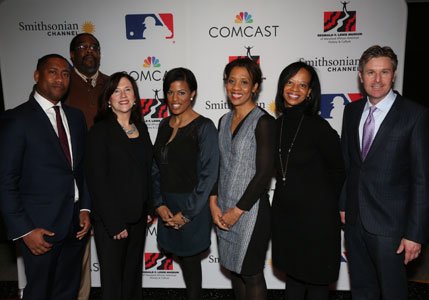 Comcast, Smithsonian Channel and Major League Baseball partnered to present a private, premiere screening of “The Hammer of Hank Aaron.” The screening took place on Wednesday, February 17, 2016, at the Reginald F. Lewis Museum of Maryland African American History & Culture located at 830 E. Pratt Street in Baltimore. The event also included a VIP reception, a panel discussion, and a Q&A session.

“The Hammer of Hank Aaron” features extensive newly captured interviews with baseball icon Henry “Hank” Aaron, who was born on February 5, 1934, in Mobile, Alabama. The film details his upbringing in Alabama, and the influence Jackie Robinson had on his life. Robinson was the first black baseball player to integrate Major League Baseball.

“He was telling the whole world, no matter who you are, black or white, if you can play the game, give him a chance,” said Aaron who recalled cutting school to hear Robinson speak at a Mobile, Alabama drug store. “And I thought that by him coming into the league, that if you give him an opportunity, you are going to have to give me an opportunity.”

The film also provides a rare and personal glimpse into the life of Aaron as he reflected back on how he hit bottle caps with homemade sticks as a youngster, and how his softball and baseball talents eventually caught the attention of a scout with the Negro League’s Indianapolis Clowns, who offered him $200 a month to play for the team.

“I left Mobile with two dollars in my in my pocket, and a satchel with one pair of pants,” recalled Aaron. “And I think they were my sister’s pants, and I went to Spring Training with the Indianapolis Clowns.”

After quick success with the Clowns, Aaron signed with the Milwaukee Braves in 1954. In 1957, he won the Most Valuable Player Award of the National League, and would crush a home run to clinch the National League pennant for the Braves, who would go on to defeat the New York Yankees in the 1957 World Series.

In 1966, at the height of the Civil Rights era, the Braves would relocate to its epicenter in Atlanta. While the film highlighted Aaron's crowning achievements, it also served as a painful reminder of the racism and hatred that accompanied the Jim Crow-era in which he played. Some of the film's most riveting moments occur after Aaron recalled the death threats he and his family received as he drew closer to unseating Babe Ruth as the all-time home run king.

“It was overwhelming,” said Damion Thomas, sports curator for Smithsonian’s National Museum of African American History and Culture. “Some people were congratulating him, while some people were threatening him. Hank Aaron received about 900,000 pieces of mail, which would probably take up the space in this room.”

However, Aaron did not allow the threats to stop him from earning his place in baseball history. On April 8, 1974, he hit homerun number 715, breaking Ruth’s record of 714. Aaron would finish his 23-year career with 755 career home runs. A 25-time All-Star selection, he was elected to the National Baseball Hall of Fame in 1982.

“As a kid, I heard Hank Aaron speak, and it really had an impact on me,” said Lameteria Hall, who attended the screening. “Watching this film 40 years later was very filling. The film talked about Aaron’s sad and happy moments, but as a kid, I only saw happy. I’ll never forget when Hank Aaron spoke to us. He was such an inspiration.”