Could Ravens Lardarius Webb’s future in Baltimore be in doubt? 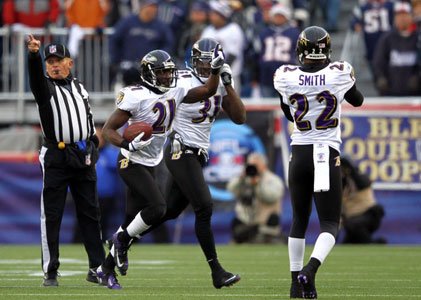 Baltimore Ravens defensive back Lardarius Webb (No. 21), celebrates with teammates after intercepting a pass during the 2015 regular season. Webb hopes to remain a Raven in 2016. (Courtesy Photo/nfl.com)

The Baltimore Ravens brass are in Indianapolis this week for the 2016 NFL Scouting Combine. NFL personnel will frequently have discussions with player representatives. Most of the talk will be about the upcoming free agency period, which starts on March 9, 2016.

Lardarius Webb remains one of the best defensive backs on the Ravens team. He played multiple positions in the secondary last year. He started the season as one of the team’s perimeter cornerbacks and then moved inside to cover slot receivers when the Ravens went to their nickel package. Webb saw some time at safety as well. It was an easy transition for him because he played the position when he was in college at Nicholls State. The Ravens have considered using Webb at safety this season, but will want him to renegotiate his contract.

If the Ravens keep Webb on the roster, he will hold a $10 million salary cap number. The team can save $4 million if they release him, but that means he would still account for $6 million of the Ravens salary cap space.

Ozzie Newsome was quick to point out how the pass defense improved when Webb was moved to free safety. “I think the biggest move is ‘Webby’ [Lardarius Webb] to safety,” Newsome said. “The way the game is going, to have someone that has some range— has some really good ball skills— back in the back end is very [much] needed.”

The secondary definitely got better when they moved Webb to a new position. They were able to cut down on the amount of plays in which opposing teams gained large chunks of yards. That was a problem that frequently put the Ravens behind in games.

The Ravens will likely ask Webb to either take a pay cut or be released. Webb re-negotiated his contract last season. Whether or not he will do that again remains to be seen. One thing is for sure— he wants to be a Raven.

Webb says he is looking forward to carrying the momentum of winning their last home game into next season.

“It means a lot to this team, to this defense, the way we ended the game on defense, just to let them know, the defense, we are still here. We’ve still got that Ravens dominant defense,” Webb said. “We just have to put our little pieces together. I think we’re going to rally from this one and continue this from now into the next season.”

We will find out soon if Webb is going to be a part of the Ravens defense next season.