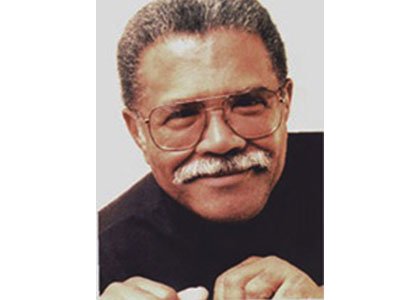 Baltimore County Executive Kevin Kamenetz announced a new Louis S. Diggs Award to honor notable African-Americans from around the county on Thursday, February 18, 2016. The award will be presented each year during Black History Month.

At 83, Diggs concedes that age may have slowed him just a bit, but it hasn’t stopped his ongoing research as he continues to dig for more valuable roots.

“Even though age is catching up with me, I can’t stop digging up our history here in Baltimore County. Deep down, I feel God is keeping me here for a reason,” Diggs said. And, his work hasn’t gone unnoticed.

Kamenetz says the award will be presented each year during Black History Month and this year’s recipients are Audrey Simmons and Ray Banks, who together brought to fruition the Hubert V. Simmons Museum for Negro League Baseball, located inside the Owings Mills Library.

history right here in our community.”

Born in Baltimore in 1932, Diggs spent most of his youth in the Sandtown area and attended Douglass High School before quitting in 1950 to join the all-black Maryland National Guard when they were federalized to support the Korean War.

Diggs remained in service with the U.S. Army until 1970, having made several trips to Korea, two tours in Germany and once stationed in Japan. Diggs counts as his most notable assignment his appointment as Sergeant Major of the ROTC Detachment at then Morgan State College where he was assigned from 1957 to 1964.

Earlier, in 1954, Diggs married Catonsville resident Shirley Washington and the couple made the area their home. After retiring from the Army in the fall of 1970, Diggs went to work for the District of Columbia Public Schools as a military instructor at Ballou High School.

In 1975, he earned his high school diploma and one year later he graduated Catonsville Community College with an Associate’s Degree. Diggs then earned a bachelor’s degree from the University of Baltimore and a Masters of Public Administration before doing post-graduate studies at the George Washington University in Washington, D.C.

He worked as a substitute teacher at Catonsville High School and he credits the students there with encouraging him to research and write about the history of the African-American community of Winters Lane in Catonsville.

“I was surprised by the naming of an award after me,” said Diggs, who has authored several books about black history.

“I only heard that I would be honored during Black History Month and expected another certificate would be given to me, sort of as usual, but upon learning about the annual award named in my honor never crossed my mind,” he said. “For African-Americans who now know about such an honor, they should realize the importance of spending time doing any type of research of the lives and experiences of African-Americans in the past.”