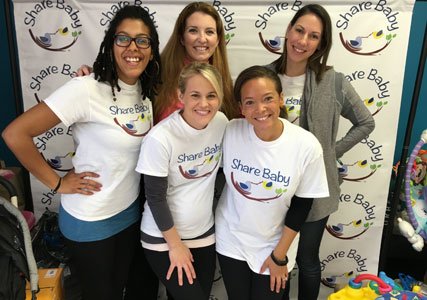 ShareBaby is a nonprofit that began when local friends who are mothers wanted to make sure that other babies could benefit from new and gently used items that they had at home. Kristin Finkelstein is the founder and co-president who works with Maya Ammons, Kate Mumaw and Monique Yuan to support mothers who live in homeless shelters in Baltimore, Annapolis and other parts of Marland by providing collected baby gear, clothes, coats, shoes and toys to children up to five years old. (Courtesy photo)

A lunchtime conversation in Baltimore between Maya Ammons, Kristin Finkelstein and Kate Mumaw sparked a growing volunteer movement to help babies and young children who live with their mothers in homeless shelters and transitional homes in Maryland. 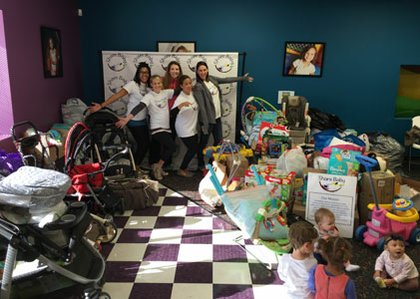 The trio agreed that outgrown toddler clothes and duplicate baby gifts from baby showers, gifts and birthday parties could be used by babies and children in need. The decision to declutter led the women from Montgomery County and Baltimore to come up with a plan to find new homes for everything from gently used strollers, carriers, formula, bottles, bassinets, maternity clothes, socks and jackets to new breast pumps and toys.

Finkelstein, a stay-at-home mom and licensed Martland attorney, founded the nonprofit, ShareBaby, Inc. (ShareBaby) in 2014. Both Finkelstein and Ammons, an instructor with Fit4Mom Montgomery County and stay-at-home-mom, are co-presidents. Mumaw, who is co-owner of Mumaw Group, LLC and office manager of Mumaw Claster Realty, serves a vice president of ShareBaby. A chief development officer, Monique Yuan, a stay-at-home mom who is also a root canal specialist, later joined them.

In addition to hosting special events a few times a year, the busy mothers of young children choose popular family places where play dates for children are built into monthly ShareBaby donation drives, to make it more convenient for other parents. The team sorts through donations that are stored until donations are delivered to partnering domestic violence shelters and homeless shelters/homeless prevention support centers like The Light House in Annapolis. Personalized wish list donations are delivered to locations in Anne Arundel County, Baltimore and Montgomery County, each December, May and August.

“We have a lot of people from the community who come in for different services. When they are in need of different items for their children especially when the cold weather starts, we’re able to offer items to them as well,” Michele Marshall, associate director of development/volunteer services at The Light House said. “They (ShareBaby mothers) ask for the names, ages and specific needs of the children that are in our program, and then they drop off bags with that child’s name on it quarterly.”

If needed items are not stocked in the ShareBaby storage unit outside of scheduled drop off times, the team uses the power of social media to locate them.

DiaperSHARE became a project of ShareBaby in September of 2015 after two Baltimoreans— Eliseba Osore and Kate Nolan-Bryden— expressed a desire to create an avenue to supply diapers to babies in need of them in Baltimore. The women who work full-time became co-directors of Baltimore’s first and only diaper bank. DiaperSHARE puts opened packs of diapers to good use. Instead of throwing them out, individuals can donate diapers that will be repackaged, counted and labeled by size so that babies who need them most can have clean diapers.

Ashley Gresh works as a community health nurse at Dayspring Programs, Inc., a transitional independent housing facility in East Baltimore where mothers with a history of homelessness and substance abuse disorders reside from 12 to 24 months with their children. Gresh says that both ShareBaby and diaperSHARE fill in the gaps for mothers who receive Temporary Assistance for Needy Families (TANF) and who survive on an average of $600 a month.

“This is a great need for our moms,” Gresh said, after receiving the first drop off of diapers. “This is definitely something that is going to help them.”

Local individuals who want to help ShareBaby may host a playdate and collect gently used items with friends. Donations can be picked up. Local Girl Scouts and Cub Scouts are invited to help sort baby clothing as service projects for ShareBaby.

In 2016, the ShareBaby team will finalize a volunteer program. The rollout will include setting up an ambassador program and establishing an online volunteer sign up system. A priority this year is to raise funds for a warehouse in Baltimore to house ShareBaby and diaperSHARE’s donations.

“The families that donate to us know that it’s going to go to a specific child,” Ammons said. “Our goal is to service [homeless shelters in] the entire state of Maryland and that is what we are working toward.”