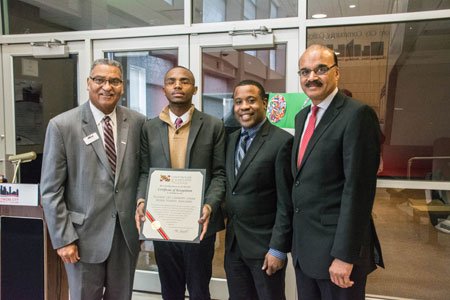 It all started with the vision of the group’s president Devone Delly: to bring college students and community members of all faiths together to show solidarity in light of recent incidents. That vision was later brought to fruition during a conversation Delly had with BCCC President/CEO Dr. Gordon F. May and Maryland Comptroller Peter Franchot during an October event on campus.

Delly, 21, a legal assistant major, visited other local colleges, universities, churches and mosques to share his idea. The result: Delly had organized an Interfaith PEACE Rally on campus.

“I believe that by treating someone with respect, you are creating a better world,” Delly told those in attendance at the rally, which took place Tuesday, December 22, 2015. “The energy you give off affects those around you tremendously. When you wake up in a positive mood, in a positive state of mind, one that is loving, caring and compassionate, you will pass that energy on to the next person.”

BCCC students and alumni, college leaders, political figures, and others gathered to express what peace means through speeches and poems, and discuss respect of different cultural backgrounds and religions. “Extremism exists in all religions, so this is not new, whether it’s Christianity, whether it’s Judaism, whether it’s Islam,” said Anwer Hasan, chairman of the Maryland Higher Education Commission. “We have to work together to eliminate the extremism.”

The main goal of the peace rally was to help dispel negative perceptions of Muslims in light of the burgeoning war against Islamic extremists and opinions being expressed in the media. “I’m a Christian myself, but I do have lots of Muslim friends,” said Veronica Jones, a member of the BCCC Student Government Association. “I think it’s very

unfair that they’re afraid to go outside of their homes.”

The Muslim Students Association, which currently is made up of about 20 members, also sponsored the rally to advocate local leaders’ call for peace within the Baltimore community, particularly throughout the Freddie Gray trials. Matthew D. Minson, legislative director for State Comptroller Peter Franchot’s office, presented the group with a proclamation of recognition for organizing the peace rally.

"An important part of my role as president and CEO is to advocate for our students who have made me extremely proud with this initiative," BCCC President and CEO Dr. Gordon F. May said. "This interfaith peace rally is a perfect example of the value we bring to our students and the communities we serve."