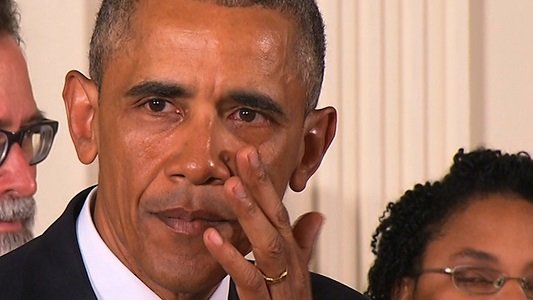 President Barack Obama grew emotional Tuesday as he made a passionate call for a national "sense of urgency" to limit gun violence. He was introduced by Mark Barden, whose son Daniel was killed in the 2012 massacre at Sandy Hook Elementary School in Connecticut. Obama circled back to that shooting in the final moments of his speech. (CNN)

WASHINGTON (CNN) — Frustrated by Congress, President Barack Obama is once again turning to the tool of executive action to achieve change, this time in the area of gun control.

Obama said Tuesday he is seeking to expand background checks for buyers. The measure clarifies that individuals "in the business of selling firearms" register as licensed gun dealers, effectively narrowing the so-called "gun show loophole," which exempts most small sellers from keeping formal sales records.

Obama has had to navigate a narrow path between gun control advocates who have been urging him to act broadly and critics who accuse him of using executive actions to impermissibly bypass Congress.

Federal law defines a dealer as "any person engaged in the business of selling firearms at wholesale or retail," but gun control advocates have long criticized a so-called "gun show loophole" that does not necessarily cover gun sales that are not performed by a federally licensed firearm dealer. Such sales could include those performed at gun shows in most states or over the Internet.

When the White House revealed details of the planned unilateral action Monday night, Dan Gross, president of the Brady Campaign to Prevent Gun Violence, praised the actions. The expansion of Brady background checks were the "centerpiece" of the President's actions, he said, adding that they will result in the expansion of background checks to the "thousands of commercial gun sales that happen."

John Malcolm, of the conservative Heritage Foundation, said that most of the actions "are not controversial or problematic from a legal stand point."

Regarding the background checks, he said "the devil is in the details and it remains to be seen what exactly the guidance put forward by the Bureau of Alcohol, Tobacco, Firearms and Explosives will be."

Other actions will include requiring background checks for people trying to buy some of the most dangerous weapons through trusts and corporations, improving the efficiency of the National Instant Criminal Background Check System (NICS) and dedicating new resources to increase access to mental health treatment.

But conservative activist Larry Klayman said Monday night that he planned to file legal action in short order. Other challenges are expected to come.

Executive actions are a broad category of power that can include everything from executive orders to recess appointments.

"Potential legal challenges will depend upon how the new regulations are actually worded, but based on what we have heard so far, challengers to the new rules will face an uphill battle because it sounds like the primary thing the President is doing is interpreting an ambiguous federal statute," said Steve Vladeck a professor of law at Washington College of Law at American University and a CNN legal analyst.