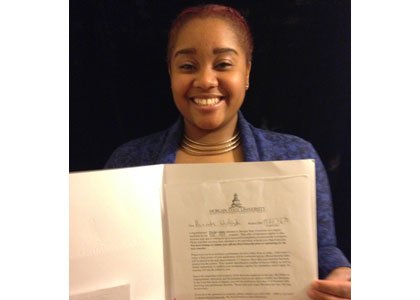 Washington, 18, received a full scholarship to the engineering program at Morgan State University (MSU), which covers tuition, housing, books and meals, with the caveat that she maintains a high G.P.A in the program.

Washington says she learned the good news after visiting MSU’s admission office on what started out as an ordinary school day and ended with cheers and excitement.

Washington took the bus to her mother’s job and they drove to MSU’s campus to meet with the admissions staff. She presented her SAT scores, high school transcripts and a desire to succeed. After reviewing her documents, she received an acceptance letter and what Washington and her mother, Ethel Joy, initially thought was a partial scholarship. Much to their surprise, it was a full scholarship. The National Honor Society student will begin her freshman year in fall 2016.

Washington says that she had lots of help along her academic journey and her greatest supporter has been her mother. She and her mother relocated to Maryland from South Carolina after a few setbacks. Joy said she wanted her daughter to have a greater chance of succeeding.

“I want her life to be different and better than some things I had to endure growing up,” said Joy. “I want her to understand that a good education can take her far— around the world!”

Washington acknowledged the support she received from Ashley Gallant, a guidance counselor at Woodlawn High School.

“She helped me to fill out my college application and other forms too,” said Washington. “She’s supported and encouraged me every step of the way.”

Washington also credits Alloysius Ndyio, a Morgan college assistant who managed the internship program established through a partnership between Woodlawn High School and Parsons Brickenrhoff, an engineering consulting firm. The competitive program is designed to recruit and train honor roll students who are interested in pursuing a career in engineering. Washington wrote a 500-word essay, which stated why she wanted to study business and engineering in college. She was one of six students selected from the high school who received a letter of recommendation from the guidance counselor and was given an internship or acceptance into the program.

As an active member of the National Honor Society at Woodlawn High School, she helped tutor her peers and collected toiletry items for them too. She also participated in several community events and served dinners at a local homeless shelter.

Joy said that her daughter is “a very strong young lady” that has a “giving spirit.”

“I encourage her every chance I can,” said Joy. “I always tell her, don’t let this world change you. I’m praying that she will be a strong leader for other young ladies to look up to.”