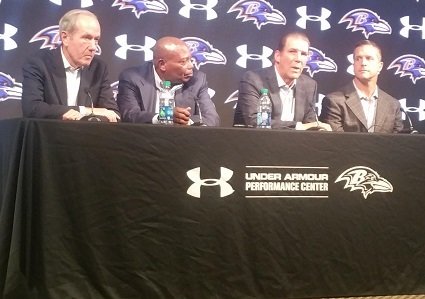 OWINGS MILLS, Md. — If there was one key word from the Baltimore Ravens year end press conference, it was the word continuity. Ravens owner Steve Bisciotti continuously referred to how crucial it is to have stability within his organization.

A 5-11 season can cause some owners to panic and rework their roster and coaching staff. Bisciotti still has trust in his coaches and is against completely overhauling the roster.

“I have a lot of faith that we’ll get it straightened out. I don’t think overhauling anything … There’s only so much you can overhaul a roster. Unfortunately, in this business, there’s an overhaul if you want it or not,” Bisciotti said. “One thing that I’m proud of [is that] we all view continuity as a strength. Continuity doesn’t stem from laziness. It comes from confidence, and I believe in these guys.”

There have been many fans who have cried out for defensive coordinator Dean Pees to get fired. Pees made adjustments to his scheme by simplifying things. He also called for his players to be more aggressive. The Ravens defense made great improvements after the bye week. Their pass rush improved and they were able to cover better in the secondary.

The way things progressed for the defense impressed Harbaugh this season. The tough season gave each of the coaches a chance to see the fight that they have within themselves.

“When you work side by side with a bunch of guys through a season like this, you find out what they are made of. And I like our guys,” Harbaugh said. “I know what kind of coach Dean Pees is. I know he is a very good coach. I look at the season and the improvements that we made – especially in the back end – throughout the course of the season, and that’s what you look for.”

Bisciotti was quick to point out how previous Ravens owner Art Modell was a big supporter of continuity. He called continuity a “sound business philosophy.”

“You just don’t turn things over based on your record or you’ll never succeed.” Bisciotti said. “If you go through the league, the winning teams are the ones who have the least turnover in their front office and their coaching staff.”

Bisciotti expanded upon his point by identifying the New Orleans Saints, Pittsburgh Steelers, Green Bay Packers, New England Patriots and Seattle Seahawks as organizations that have found success because of continuity.

“The other teams who aren’t getting to the top are the ones that have been through two, three and four coaches and one, two and three different GMs in just this last eight years,” Bisciotti said. “Continuity, I think, is a huge part of the recipe for success.”

The Ravens roster could certainly use an influx of playmakers that would make the team more explosive. The team will have to weigh some of the options that will be available to them by way of free agency and come away from the draft class with some impact players. Those are the pieces that will complement the foundation of stability that the Ravens are built on.