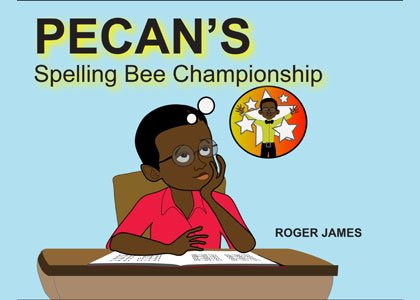 New Year’s resolutions are sometimes left unfulfilled. However, hearing motivating stories about others who take deliberate steps to turn their dreams into a reality over time can offer substantial encouragement to others. Roger James, 41, is a multi-talented visual artist from Riverdale, Maryland with an illustration, graphic design and oil painting background. On Jan 1, 2016, James released “Pecan’s Spelling Bee Championship” on Amazon, officially marking his debut as an author. James regards writing, illustrating, designing and self-publishing his own children’s book as his biggest professional accomplishment. James previously created children’s illustrations for other authors over the years, but this story is loosely based on the artist. Readers from age six to eleven may relate to Pecan’s golden wish to become a spelling bee champion.

Roger James is an independent artist with an illustration, graphic design and oil painting background. He released his book, “Pecan’s Spelling Bee Championship” on Amazon on January 1, 2016, marking his debut as an author.

“I felt it [writing and publishing “Pecan’s Spelling Bee Championship”] was the best way to showcase my overall talents that includes writing stories, layout and book illustrations. I've always wanted my art work to tell a story, so outside of creating a themed painting, writing a children's book is the best thing for me to do,” James said. “Honestly, this book is just the beginning of where I would like to go ultimately. I want to this book be a gateway into animation. With the illustrations, I will show perspectives from different areas.

I learned in animation how important camera location and angles are.”

James’ parents, Anthony James and Elizabeth James are originally from Grenada in the West Indies. James explained that he was unaware of the many careers that an artist could pursue, until he began his senior year of high school, then later in college. In 1997, James graduated with an art degree from University of Maryland, College Park. He earned a Media Arts & Animation degree from The Art Institute of Pittsburgh (Online Division) several years ago.

Another one of James’ specialties is life studies. Photos of artwork that he posts online, often elicit comments within his social media circle. Some wall paintings are commissioned art pieces, others are of public figures, singers, leaders, athletes, high-profile businessmen or actresses like Taraji P. Henson and Bernadette Stanis. Stanis, who is widely known for portraying Thelma on the seventies TV show, “Good Times” has one of James’ original pieces that he created of her. When he was an exhibitor at the Black Heritage Art Expo in Baltimore several years ago, he had an opportunity to meet the actress.

“I've always wanted to bring out the personalities of celebrities through paintings,” James said, noting that this year he will begin working on images of people he knows.

In the meantime, James is already working on two other stories in his children’s book series. The new author is satisfied choosing to self-publish his book while maintaining control of his work. Characters of color are still under- represented in children’s books, yet James was able to create impactful artwork while telling a story.

“Kids of all colors like to be seen in cartoons, animations and especially children's books. They are not seen as much, and in some cases are afterthoughts in certain books, animations and cartoons. Artists of color should be creating art work and illustrating kids of color without having to be asked to do so,” James said.

While adding to his artistic portfolio, James who aspired to be an artist from the age of five, continues to take leaps of faith to try new things that are connected to his passion for art.

“Like a musician that does a lot of gigs to less than sold-out audiences, you do it for the eventual payoff. If you love what you do, you will stay with it and deal with whatever happens,” James said.

For more information about James’ art and his children’s book, visit: www.jamesstudiio.com.