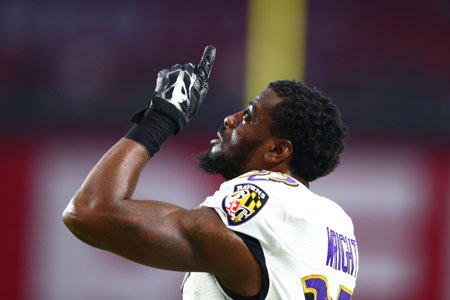 Cornerback Shareece Wright points to the sky before a Baltimore Ravens game during the 2015 season. (Courtesy Photo/www.nfl.com)

Shareece Wright wanted to be a Baltimore Raven for quite some time prior to joining the team in October. His ties to the team run directly through high school and current teammate Jimmy Smith. Wright signed a one-year deal with the San Francisco 49ers after playing his first three seasons with the San Diego Chargers.

The Ravens were able to pick up Wright after he was released by the 49ers and he has proven to be a valuable addition. Wright has been able to rebound from his Ravens debut and show why he should be brought back after the season.

Defensively, the Ravens have improved significantly over the last few weeks. Wright has locked down the left corner position when the Ravens are in nickel packages. He and Smith have done a very good job of putting the clamps on opposing receivers on the outside.

Smith lobbied for Wright to become a Raven when he was a free agent. He has been impressed with what Wright has been able to do. Their success reminds Smith of their days at Colton High School in California.

“The first game was rough for him but since then, he has kind of showed his technique, showed the player that he is, the type of player he can be, and hopefully we can keep him around,” Smith said. “He came in, and he has done a lot for us, and he has the left corner spot right now. [It’s] kind of reminiscent of high school days when we used to go down— shut it down in high school.”

John Harbaugh was very upset about two specific plays in which Wright struggled in his debut against the 49ers. Harbaugh has since had nothing but praise for Wright since then. Harbaugh’s blue-collar mentality makes him appreciate the players who come into the building and put in the necessary work every day. Wright has certainly exhibited a good work ethic since he has been in Baltimore.

“He has done nothing but worked his rear end off to do everything we’ve asked him to do technique- and assignment-wise, and it has showed up in his game,” Harbaugh said. “As a coach and a player, that’s so rewarding to see that.”

“The thing about Shareece is— and I’ve always loved this about him— this guy is a humble, hardworking, confident [and] good-hearted guy that wants to be really good and wanted to be in Baltimore from way back even when he was coming out of the draft.”

It’s safe to say that Wright has settled into a comfortable zone with the Ravens defense. The secret for him has been hard work and the help of his teammates.

“I keep working hard every day. I’m learning this defense and I have gotten comfortable with what my role is. It was great to have Jimmy and be able to sit next to him on the plane and talk about the game on the way back,” Wright said. “It helped a lot. All of the guys in the secondary embraced me and have been a big help.”

Wright definitely wants to return to the Ravens next season. He will be an unrestricted free agent. Wright signed a one-year deal with the Ravens earlier this season. The team has a high draft pick and may end up selecting a defensive back, but Wright would be insurance on the outside.

The chemistry with the team is definitely there. He fits into what the Ravens want to do at times from their corner on the outside. There were other teams interested in Wright when he was released by the 49ers. He chose the Ravens. Now it’s the Ravens turn to choose him to be a part of their defense going forward.