White House fights 'lame duck' image ahead of State of the 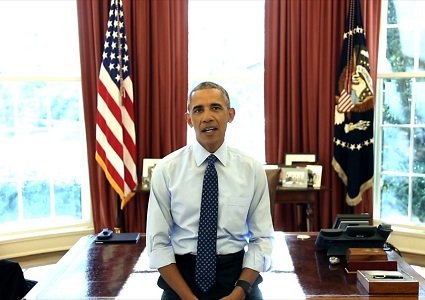 The White House on Wednesday released a clip of President Barack Obama in a video trailer previewing his final State of the Union address. (Photo:The White House)

WASHINGTON (CNN) — Don't even say the words "lame duck" around the White House as President Barack Obama prepares to deliver his final State of the Union address. Even after Obama speaks to what could be his last, big TV audience on Tuesday night, White House officials are confident Obama will not only stay in the headlines, but set much of the agenda for the 2016 campaign as well.

"We like it and we're pretty good at it," boasted one senior White House official of Obama's ability to influence the nation's political discourse.

Within minutes of being asked the "lame duck" question, White House officials produced a list of the West Wing's self-described highlights of 2015 -- from the nuclear deal with Iran to the climate change agreement brokered in Paris last month. All of that happened, the White House argues, after Obama's humbling mid-term defeat in 2014.

"I have got a lot of people asking me this question back in November of 2014, after Democrats had been beaten badly in the mid-term elections," White House Press Secretary Josh Earnest said, pointing to the President's Pacific trade deal and the administration's sequestration busting breakthrough on the budget.

"All of that happened since many pundits were prepared to say that the president was irrelevant and unable to advance his agenda," Earnest told reporters Monday.

The White House also eagerly notes what appears to be an immediate move to the left on gun control from Democratic presidential contender Bernie Sanders, just days after Obama posted an op-ed in The New York Times warning Democrats he won't campaign for candidates who don't take on the firearms industry full throttle.

Despite the presence of former top White House officials inside the Clinton campaign hierarchy, Earnest denied the guns jab at Sanders was designed to help the former Secretary of State. White House officials promise Obama will campaign hard for his party's eventual nominee and have not ruled out a presidential endorsement before the primary process is completed.

Obama has met privately with Clinton on at least three occasions over the last year, but only once with Sanders.

Of course, Obama will continue to come up at events for Republican presidential candidates.

"I'm running for president because the only way we're gonna change the damage being done in Washington by Barack Obama is to elect a president that will undo that damage," Marco Rubio told supporters at an event Monday.

Obama and his aides have largely avoided commenting on Trump's rapid rise. The president views the blunt spoken business tycoon's sudden dominance in the Republican party as "a problem of their own making," according to one White House official.

Progressive supporters of the President hope Obama will eventually fire back at Trump and begin refuting some of the billionaire's more controversial comments.

"The other thing I think this president has got to do, he's going to have the last best opportunity to push back on some of this really offensive rhetoric from Donald Trump. I hope he'll explain to the country why demonizing a whole religion makes Americans less safe," said former Obama environmental official and CNN political contributor Van Jones about Trump's plan to ban Muslims entering the U.S.

Jones noted Obama only has a limited amount of time left in his second term to devote to a few remaining legislative priorities.

"Unfortunately the president, he admits, the clock has probably already run out for a congressional fix on the gun problem," Jones said. "It has not run out, though, for criminal justice reform and prison reform. There's still bipartisan energy there. He can get that done."