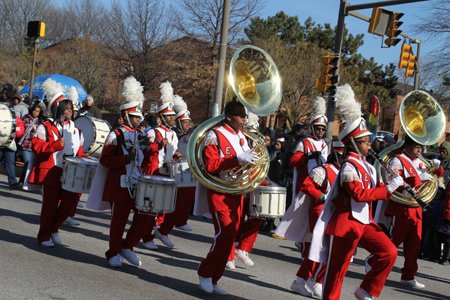 A band marches in the 2014 MLK Day Parade in Baltimore. Courtesy Photo

Navasha Daya of the Youth Resiliency Institute and local singer of “Baltimore Stand Strong” will sing the National Anthem at the reviewing stand at the intersection of Martin Luther King, Jr. Boulevard and Eutaw Street just before the parade sets off.

More than 50 groups will participate in the parade including high school and community bands, honor/color guards, equestrian units, fraternities and sororities, lively dance squads and civic organizations. This year, organizations such as the NAACP honor Dr. King and other civil rights leaders by making colorful floats that also represent the theme of #OneBaltimore.

Spectators are invited to view the parade along the route or near the reviewing stand at Martin Luther King, Jr. Boulevard and Franklin Street. This year’s parade is emceed by Konan of “The Ko Show” on 92 Q and April Watts of Magic 95.9 FM.