Derrick Henry declares for 2016 NFL Draft, could be Ravens target 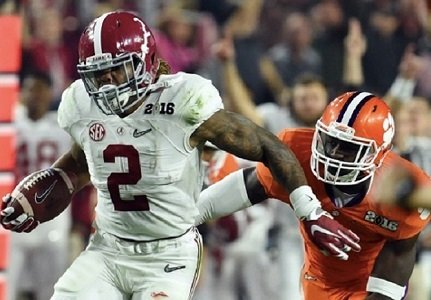 Alabama running back Derrick Henry breaks away from the Clemson defense en route to a 50-yard touchdown run in the Nation Championship game at University of Arizona Stadium in Glendale, Arizona. (Photo courtesy/cbssports.com)

University of Alabama running back Derrick Henry elected to forego his final season of eligibility and declare for the 2016 NFL Draft. It’s a move that many thought he would make, especially after winning the Heisman trophy and leading Alabama to a National Championship. There’s not much more he can do at the college level.

Henry is coming off of a season in which he carried the football a whopping 395 times for 2,219 yards. He averaged 5.6 yards per carry. Many will look at the 395 carries and say it was too many. The fact of the matter is, Henry doesn’t take big hits often and is 6-3, 242 pounds. In short, he’s built for punishment. He is often times the one delivering the blow when he is tackled.

Henry would likely be selected at some point in the second round. The Ravens have a top pick (40th overall). That may be a bit high to select Henry. A trade up is surely possible if he is on the board in the mid to late second round.

The Ravens could draft Henry at some point in the second round and use him to solve their short yardage problems. Having a big running back such as Henry would surely give them more incentive to run the ball more to convert first downs. The Ravens threw the ball at a high rate on third and short last year.

Henry is more than just a big back. He will likely run in the sub 4.5 range at the Scouting Combine, which is extremely fast for a 240 pound running back. That speed shows up on the field as well. It is rare that you see Henry get caught from behind. He destroys pursuit angles and outraces defensive backs to the end zone.

His size will make people think he is just a bruising back that can’t change direction. That is not the case. Henry shows the ability to change running lanes with a sudden cutback and accelerate up field in a hurry. There is very little wasted movement with him. He puts his foot in the ground and runs north and south.

Some will look at his 11 receptions last year and question his catching ability. It remains to be seen how well he can catch the ball out of the backfield. One thing is for sure, he can put the ball in the end zone as shown by his 28 touchdowns last year.

Justin Forsett is under contract through 2017. Buck Allen has a bright future as an all-purpose back with the Ravens. Lorenzo Taliaferro has been solid when healthy but has struggled to avoid injuries. Terrance West was impressive in spots last season as well.

The Ravens would have a decision to make if they decided to select Henry. They would likely have to move on from Taliaferro and West in 2016. This would allow them to have a trio of Forsett, Allen and Henry. A one-two punch of Allen and Henry would be a productive combination at running back for the Ravens in the future.