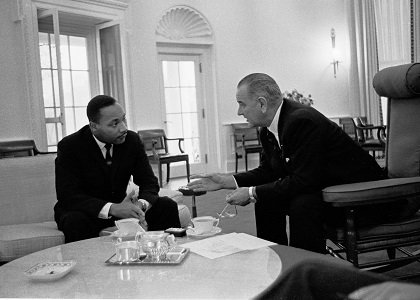 (CNN) — We've come so far from that fateful day on April 4, 1968, when a bullet ended the Rev. Martin Luther King Jr.'s life, yet we have so terribly far to go.

Violence, hatred and the spiritual sickness he talked about in our country are alive and well. That is why I think it does us some good as a nation of millions to not just say we love King on his birthday, to not just honor him with the national holiday, or even by doing service on that day.

We do ourselves a great disservice if we do not challenge ourselves, and others, to actually spend time, throughout our lives, to read and listen to his words. I have found in my travels and interactions as an activist and advocate for humans of all kinds that, when asked, many of us admit we have never even read the "I Have a Dream" speech in its entirety.

If we did, we would know that this speech so deeply connected to the notion of a dream of a different America begins with a history lesson, tying modern America to President Abraham Lincoln and the Emancipation Proclamation.

If we did, we would know that King declared, matter-of-factly, that America had not made good on its promise of full citizenship rights to black people. We would acknowledge, 50 years later, how sad and unfortunate it is that we are still having the same conversations about equality for people of color, women, the LGBTQ community, the poor, the disabled and immigrants.

But there is more in the "I Have a Dream" speech that is often ignored or forgotten. King used the term "police brutality" twice in this historic address, and here we are many seasons later wondering why police-community relations are so tainted.

This is why King asked and answered his own question: "'When will you be satisfied?' We can never be satisfied as long as the Negro is the victim of the unspeakable horrors of police brutality."

King encourages us not to drink from the cup of bitterness, to conduct our resistance to injustice on the high moral plane, a lesson some of us need to learn or relearn as we engage in civil disobedience in this new millennium. But those who say movements of today are disrupting their lives also fail to connect that the civil rights movement was completely about making the comfortable uncomfortable until real justice was served.

The speech was delivered on August 28, 1963, and here we are in 2016, a presidential election year, with voting rights still under attack and candidates engaging in divisive language against the America they do not want to see or acknowledge, or against those whom they conveniently blame for America's troubles. Yet they, too, will pause on the King national holiday and say they loved the man and his ideals, when we know that is not the truth.

Nor do they love people like my mother, a woman born and bred in the backwoods of South Carolina, whose 20th birthday was the same day as King's "I Have a Dream" speech. My mother and her family were so poor she interrupted her education for the first of many times when she was only 8 years old, to pick cotton on land owned by local whites that had been forcibly taken from her grandfather upon his death at their hands. The family was so poor there was no telephone, no television, no radio, and no indoor plumbing.

My mother and people like her may not have been present when King gave the "I Have a Dream" speech, but their spirits, hopes and aspirations were there. And as he instructed folks to go back to their home states to keep marching and fighting for what was right, something must've swelled in my mother's bosom, and the bosoms of two of her sisters, as they left their home, left the South, and found their way North, to New Jersey, where I was born.

My mother would never complete her education but the dream King spoke about in the rhythmic cadence of the Baptist preacher he was lit a spark in my mother. She was a single poor black woman raising a child by herself, on welfare and food stamps, in a rat- and roach-infested ghetto, but she understood that I had to go further in school than she had; her dream was for me to have my own dreams manifested through education. King was right, and my mother was right. We just needed an opportunity to have an opportunity.

We are all sisters and brothers

It would take me many years to truly appreciate the words of King, from his iconic "I Have a Dream" speech to his final words, really his own eulogy the day before he died, the "Mountaintop" sermon in Memphis, Tennessee. As a boy it frightened me mightily to learn that King had been killed because he was fighting for the rights of black people, of all people. Doubly confused me that his words spoke of love and peace, yet he was gunned down in cold blood on the balcony of a motel.

Years later, still, I lost respect for King, when I was in college, because I did not think he was as fearless as other black leaders of his time, like Malcolm X and the Black Panther Party. But how wrong I was, I would come to realize. For it takes great courage to love any people who do not love you. It takes great courage to push for peace with every fiber of your being when violence is the language of those who believe in hate, division and fear.

And it takes great courage to see an America full of unity and togetherness even when fellow Americans cannot imagine it for themselves.

"I have a dream that one day, down in Alabama, with its vicious racists, with its governor having his lips dripping with the words of 'interposition' and 'nullification' --- one day right there in Alabama little black boys and black girls will be able to join hands with little white boys and white girls as sisters and brothers."

Yes, it was right there in the "I Have a Dream" speech when King talked of this conversation among us, Jews and Gentiles, Protestants and Catholics, coming together to sing in the words of a Negro spiritual, because it had to be a two-way street: I can learn from you but you can also learn from me. That is how we do more than tolerate each other. That is how we come to respect and love each other.

This notwithstanding, as we approach yet another celebration of the life and monumental legacy of the Rev. Martin Luther King Jr. I would be lying to you if I said my heart is not heavy. It is weighted by the trauma and shock of one too many black people --- my people, your people --- being the victims of some form of racial hatred.

To reach the mountaintop

I want to believe that Martin Luther King's dream really does matter, that my life matters, that all of our lives matter. But as I've listened to his speeches through the years, I've also come to recognize the despair in King's voice near the end of his life, as people turned their backs on him when he became one of the first national leaders to condemn the war in Vietnam.

I sensed his sorrow when he talked about the need for a relevant ministry among the faith community, and how so many have moved so far away from being relevant in these times. I think of how King asked us to practice a dangerous kind of selflessness, to not put ourselves, our lives, our material things, before people. The dream cannot be only about individual success, individual progress, while ignoring the plight of others. Even if we have some form of privilege, as King himself had, we must never forget that the basics of life must be for all people.

I think about how King, in that final speech, says that he has been to the mountaintop, really a continuation of his "I Have a Dream" speech. Especially when he says, with a voice drenched in 13 long years of movement work for the people (from Montgomery to Memphis), with a fatigue created by many death threats and sleepless nights, that we, as a people, will get to the Promised Land.

And I believe that, too, even on those days when I am so very tired of doing this work of service, sometimes with little acknowledgment. To paraphrase the words Bobby Kennedy said to an Indianapolis crowd on the night King was assassinated, we've got to make an effort to be compassionate and show love, toward ourselves, toward each other, for the sake of ourselves and for the sake of America.

Kevin Powell is the author of the new book "The Education of Kevin Powell: A Boy's Journey into Manhood." Follow him on Twitter @kevin_powell, or email him at kevin@kevinpowell.net. The opinions expressed are solely those of the author.