Half of those with glaucoma don’t know it; Are you at risk? 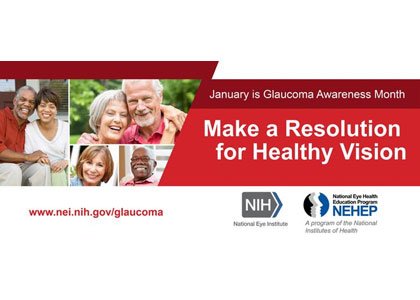 Approximately 2.7 million Americans have the potentially blinding eye disease glaucoma, but only half are aware of it. Meanwhile, glaucoma incidence is on the rise. Researchers predict that glaucoma will affect as many as 6.3 million Americas by 2050. During Glaucoma Awareness Month in January, the American Academy of Ophthalmology is sharing a list of risk factors that can lead to the disease.

Glaucoma is a group of eye diseases that damage the optic nerve, which links the eyes to the brain. It is most commonly associated with elevated pressure inside the eye, known as intraocular pressure, or IOP. Without treatment, glaucoma can cause irreversible vision loss in a person’s side vision, then in his or her central vision. With early diagnosis and treatment, sight can be preserved. However, glaucoma has no noticeable symptoms in its early stages, so it is imperative that people know the risk factors.

Certain factors can increase an individual’s risk of developing glaucoma, including:

Family History: Individuals with a parent or sibling with glaucoma have a nine times higher risk of developing the disease, according to one study.

Older Age: As people age, their risk for glaucoma increases. Because this is the case for several eye diseases, the Academy recommends that adults start getting regular comprehensive eye exams at age 40. This is the age when early signs of eye disease and changes in vision may first occur, even if you have seemingly perfect vision. It is important to get comprehensive eye exams from an ophthalmologist, a physician specializing in medical and surgical eye care.

African, Hispanic or Asian Heritage: People of African and Hispanic heritage are three times more likely to have the most common form of glaucoma than Caucasians. Glaucoma-related blindness is at least six times more prevalent in African Americans than in Caucasian Americans. Additionally, people of Asian heritage are at an increased risk of a sudden and acute form of glaucoma known as angle-closure glaucoma.

Type 2 Diabetes: Having type 2 diabetes increases risk of glaucoma. The longer a person has lived with diabetes, the greater their risk for glaucoma becomes.

Additionally, when the cornea— the clear, round dome on the front of the eye that covers the iris and pupil— is abnormally thin, IOP readings may be falsely low. This puts patients at increased risk for undiagnosed glaucoma. This is common among those who have had refractive surgery, such as LASIK or photorefractive keratectomy. Another risk factor associated with glaucoma is a history of eye trauma.

“Many of my patients are surprised to learn that one or more of these factors put them at an increased risk,” said Andrew Iwach, M.D., a clinical spokesperson for the American Academy of Ophthalmology and glaucoma specialist. “Being aware of your personal risk of glaucoma is the first step to saving your sight. If you are at risk, get an exam from an ophthalmologist— the sooner you do, the better we can protect you from vision loss.”

Glaucoma treatment ranges from medicated eye drops to a variety of surgeries that can help reduce high IOP. This may involve procedures that make small changes in the eye to help fluid drain more easily. In some cases, small devices known as shunts or stents are inserted in the eye to increase the flow of the eye’s fluid.

People age 65 or older and concerned about their eye disease risk may be eligible for a medical eye exam at no out-of-pocket cost through EyeCare America™. In addition, those who are at an increased risk for glaucoma may also qualify for a glaucoma exam through EyeCare America. This public service program from the Foundation of the American Academy of Ophthalmology matches volunteer ophthalmologists with eligible patients in need across the United States. To see if you, your friends or family members are eligible, visit www.eyecareamerica.org.

To learn more about glaucoma, its risk factors and its treatment, visit: www.geteyesmart.org.