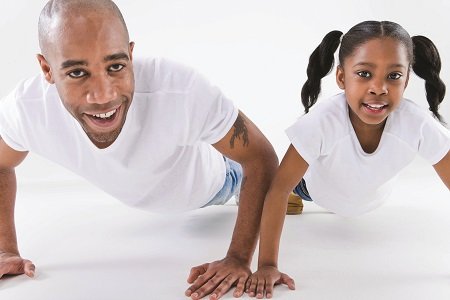 The confetti and champagne bottles have been cleaned up. So now millions of Americans will embark on their New Year's resolution to— finally!— hit the gym and get healthy.

Most will, unfortunately, fail. Making and then promptly abandoning resolutions to exercise and adopt a healthier lifestyle have become something of a national pastime but there's a way to break the cycle. And it doesn't require shelling out beaucoup bucks for a personal trainer or foregoing dessert. The solution is as simple as it is effective— resolve to stand more.

Standing for just a couple more hours a day can be as beneficial as training for a marathon. It's the easiest way to finally fulfill that New Year's resolution to get fit.

Standing more is such a powerful approach to improving health precisely because it doesn't require radical lifestyle changes or a Herculean willpower.

Most Americans live sedentary lives. Nearly 90 percent are working in jobs that have them sitting all day. Then there's the time spent commuting in the car, eating, and watching TV. Add that all up, and the average American spends over six hours a day strapped to a seat.

However, sitting isn't a harmless comfort. At these volumes, it's deadly. Prolonged sitting prompts muscles to downshift their metabolism and burn less fat. That causes blood circulation to slow down and makes it easier for fatty acid to build up in the heart. Cardiovascular disease can be the eventual result.

In fact, a study in the American Journal of Epidemiology found that men who sit six or more hours a day are about 50 percent more likely to die from chronic disease, compared with those who sit three hours or fewer.

Even a small commitment to standing can generate massive health benefits. Dr. John Buckley of the University of Chester in the United Kingdom notes that standing for an extra three to four hours a day at work "is the equivalent of running about 10 marathons a year."

That consequence should be of interest to employers. Encouraging standing can be a low-cost way to goose worker productivity— and thereby boost the bottom line.

Employers can start by adopting an "Active Design" approach to their workspaces, structuring them so that they're conducive to regular movement. They can offer workers height-adjustable sit/stand desks instead of traditional seated ones. They can replace company cafeteria tables with high tops. Managers can switch to standing meetings.

Employers can also encourage people to take the stairs. Dr. Karen Lee at New York City's health department has noted that if the average adult climbed the stairs for just two minutes a day, she'd burn enough calories to prevent weight gain for the whole year.

All these little workplace enhancements add up to much healthier— and happier— employees.

Those who have resolved to improve their health in 2016 needn't fret about gym memberships or fad diets. They just have to start standing more. A couple more hours a day off the seat can make that yearly resolution a reality.