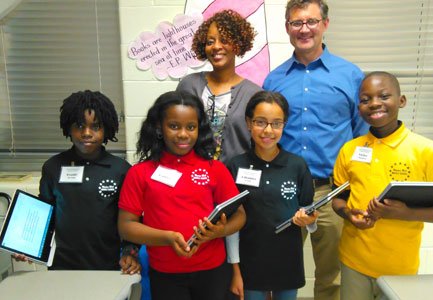 “It’s no longer about the students sitting in rows and columns-sitting still and listening to the teacher talk for 60 to 90 minutes,” said Harvey Chamber, principal of Windsor Mill Middle School. “Students are now facilitators and in charge of their own learning.”

In partnership with Discovery Education and McGraw Hill, Windsor Mill Middle School (WMMS) hosted a Night of Innovation on December 3, 2015 where more than 13 demonstrations were conducted throughout the school to spotlight the impending technological advancements that will occur in all Baltimore County Public Schools (BCPS). Part of (S.T.A.T) Students and Teachers Accessing Tomorrow- the digital instructional and conversion, WMMS is one of 17 Lighthouse Schools within BCPS that will implement the change.

More than 30 trained student leaders escorted parents and guests around the school and served as hosts during breakout sessions. One student served as a reporter and conducted live interviews on the video-streaming app Periscope.

Sherri Jones, the mother of sixth grader Kiersten Jones, appreciates the online learning piece at WMMS that her daughter has embraced. Kiersten was initially apprehensive about attending a new school but once she arrived and saw all of the technology, her excitement increased. Kiersten said learning is fun since she started attending WMMS.

“She loves it,” said Sherri Jones. “The students have math every day and Kiersten is now in the G.T. [gifted and talented] class, which was not the case prior to attending WMMS.”

“Students are reading more, even if it is online,” said Jones. “And that’s a good thing.”

Ryan Imbriale, executive director of Innovative Learning at BCPS is focused on the goal while helping to guide the new program.

“What it boils down to from a pedagogical and mastery standpoint, teachers are the critical glue that holds mastery in the classroom,” said Imbriale.

Imbriale noted that teachers are able to benefit from the knowledge that tech-savvy students bring to the classroom. Educators should take advantage of those students who are able to problem-solve, as it pertains to the use of the technology.

The early evaluation results show that the students are more engaged, which translates into a higher level of collaboration and communication. There is a balance between using paper and pencil and the use of the device. At WMMS, access to digital learning provides real-time information, 3D modeling, science experiments and the ability to connect with others from around the world.

“This is about ensuring every student graduates globally and are competitive,” said Imbriale.

When students are engaged and excited about coming to school, there is a decrease in disciplinary issues and personalized learning is enhanced, according to Imbriale.

Principal Chambers is keenly aware of the area’s changing demographics. He noted WMMS is more of a suburban-urban school.

“Yes, we have a change in the demographics, but our students are not any less able to learn than any child in the county,” said Chambers. “When they have the right teacher in front of them, and the teacher conveys a caring and compassionate demeanor, the student is more engaged,” said Chambers.

According to Principal Chambers, the teacher to student ratio is one to 25, however math classes are much smaller to help raise the students’ scores. Since the change, preliminary math assessments have gained 24 percentage points.

“Technology built on the science of learning has the potential to personalize and improve education, but only if it’s implemented thoughtfully and effectively. The Baltimore County Public Schools are a shining example of how technology can be used strategically to support the art of great teaching,” said Christine Willig, president of McGraw-Hill Education’s K-12 group. “We’re proud to be Baltimore County’s partner in improving learning outcomes district-wide.”

The sixth graders have been using the devices since the school year began. Over the next two years the program is on track to issue the device to seventh and eighth graders, too.

Principal Chambers says he is a proponent of the program and commends Dr. S. Dallas Dance, Superintendent of BCPS, for invigorating the learning and teaching process.

“I’d rather for you to be uncomfortable with learning new things, than to revert back to the old things and changing the date on an old lesson plan,” said Chambers. “I can’t speak for the other kids in other schools, but our students need something to excite them and the technology is doing just that.”