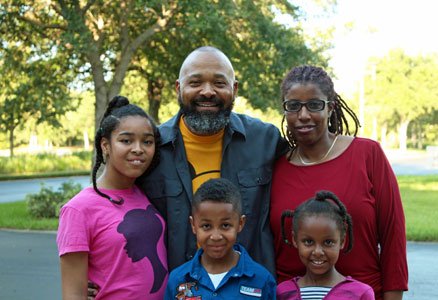 Derwin and Wendy Penson with their children, 10-year-old Ebony; five-year-old Skylar; and seven-year-old Nevaeh. In the fall of 2015, the Pensons were approved by a family court judge to officially adopt and provide a permanent home to their three children. (Courtesy Photo)

Adoption was something Derwin Penson and his wife Wendy considered only in passing a long time ago.

For about a quarter of a century, the couple enjoyed a marriage that included lots of fun together, travel and their work as stateside missionaries with Wycliffe Bible Translators USA in Florida.

“Then, one day, my husband turned on the television and saw this little girl crying out to her father; begging him to stop as he was beating a police officer nearly to death. She was crying stop and he said, ‘I’m sorry baby but I’m not going to jail.’ And, of course, he was going to jail and we thought, ‘who was her mother to leave her with this man and who was going to take care of her now?’” Penson said. “That just stayed with me.”

Later, Derwin Penson read an article about African-American children growing past the age of when most people are reluctant to adopt them.

So, they reached out to a friend who suggested they contact Community Based Care of Central Florida, an organization that provides an adoption training class.

“We thought that it was time for us to open up our home,” Wendy Penson said. “Everybody deserves a chance at life and when you take the class you do realize it’s not for everybody but everybody can help by giving, by mentoring and in other ways.”

The Pensons would fist-bump each other each day for added encouragement as the intense twelve-week program involved homework and constant internal and external assessment, that included telling their life story, background checks, and examining relationships with family members and co-workers.

“The classes are designed to assess how you’re living, what your lifestyle is, what your influences are, to determine your readiness,” Derwin Penson said.

The goals of foster care are to foster until a permanent home is found; to stabilize until an adopted or biological family is found, and again, to weed out those individuals who are not ready, according to Penson.

In February of 2015, the Pensons were approved by a family court judge to officially adopt and provide a permanent home for three children.

“People have been praying for us along this journey and for that, we are truly grateful,” Wendy Penson said, noting that the need to adopt children, particularly African-Americans is great.

Studies examined by the National Black Caucus of State Legislators reveal that African-American children who come into contact with the child welfare system are disproportionately represented in foster care, and are less likely than children of other racial and ethnic groups to move to permanent placement.

Further, African-American children account for 15 percent of the U.S. child population but as of September 2011, were 27 percent of the 400,540 children in foster care and have lower rates of adoption than those of other races and ethnicities.

“There are kids out there who will never get adopted who just want love and care. You don’t have to be superhuman. These kids just want a consistent place to live,” Penson said. “When you hear them speak, you realize they know what they’re missing and it breaks your heart. If everyone who ever thought about adoption would just explore it and pursue it we could probably get all of our children out of foster homes.”