Disney on Ice 'Treasure Trove' set to arrive in Baltimore 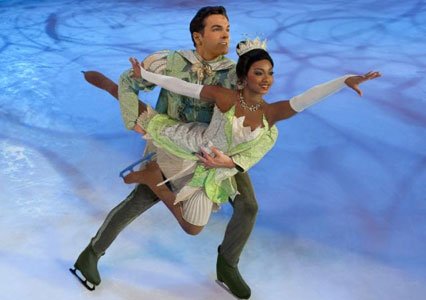 Hope Alexander, who portrays Princess Tiana with Prince Naveen from “The Princess and the Frog,” is part of an extraordinary lineup of stories from the Disney animated film vault that will come to life in Disney on Ice presents Treasure Trove at the Royal Farms Arena in Baltimore, February 3-7, 2016. (Courtesy Photo/Disney on Ice)

BALTIMORE — The ultimate Disney animation celebration will be held at the Royal Farms Arena in Baltimore, February 3-7, 2016. Produced by Feld Entertainment, Disney On Ice presents "Treasure Trove"is Disney’s 50th animated feature and Disney lovers will see Peter Pan; Tinker Bell; Captain Hook; Simba; Alice and the Mad Hatter; and a host of other characters and princesses come to life in the production.

In "Treasure Trove," Hope Alexander portrays Princess Tiana from “The Princess and the Frog.” The 26-year-old who was born and raised in Wilmington, Delaware will perform in Baltimore for the second time.

“I just think the show has something everyone can enjoy,” Alexander said, noting that besides her part in Treasure Trove, another eye-catching number is the performance of Under the Sea with Ariel and Sebastian from The Little Mermaid.

Getting accustomed to moving from city to city and country to country every week or so was once Alexander’s toughest challenge during her performance career. However, she has grown accustomed to her ever-changing life of packing and unpacking while performing in exciting places.

She says she has made lifelong friendships while working for Feld Entertainment and seeing the smiles of Disney lovers and observing the excitement when they see their favorite character coming to life, has made the journey to destinations like Japan, China, the Philippines, South Korea, Australia and New Zealand all worth it.

While performing in Baltimore, Alexander’s additional bonus is getting to see family and friends. She explained that because she is usually on the road six to eight months at a time, she really enjoys performing close to home. Her family and friends are able to come to the shows to see her perform. They are always very supportive and very loud in the stands.

Alexander started to skate at the age of two, when her mother, Cherise Alexander would take her around the ice rink. Early morning lessons became a part of her routine as she grew older.

Between age seven and 16, Alexander skated competed on ice. A knee injury interrupted her competitive skating but a track scholarship led her to Miami University. After graduating with a B.A. in International Studies, and a B.A. in French in 2011, she revisited her passion ice-skating, which had always been a major part of her life. She joined a few smaller skating shows before joining Feld Entertainment in 2012.

“I still wanted to be involved in skating, and that’s when I auditioned for shows and picked it back up again, and here I am today,” Hope said. “It’s my fourth year with Treasure Trove.”

Her father, Romain Alexander, was also supportive of Hope’s desire to skate. Both of her parents were athletes growing up and in college. She shares her role models’ athletic genes.

“My mom ran track, and my dad played football in college and professionally,” Hope said. “Just watching how hard they’ve worked and how they’ve persevered, and just to see where they came from and where they are today is really inspiring.”

Hope wants to serve as inspiration for a little boy or girl who spots her happily skating on the ice. Perhaps he or she may also want to pursue a rewarding career in skating or even something considered less common.

“I just say keep at it because you never know where it will take you,” Hope said. “I stuck with skating for all of these years, and now I’ve been throughout the U.S. and all over the world, and I wouldn’t change it for the world. So just keep at it and don’t give up!”

For more information, performance times, or to purchase tickets, call: 1-800-745-3000 or visit: www.ticketmaster.com.