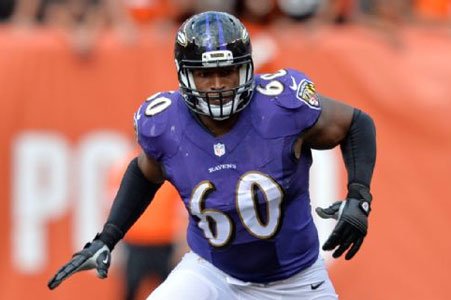 When it comes to the offensive line, left tackle could be considered the glamour position. That position attracts the most attention and generally warrants the highest salary. The Baltimore Ravens traded a fourth and fifth round pick in the 2014 NFL Draft for left tackle Eugene Monroe.

The Jaguars had new coaching staff and decided to part ways with Monroe. He came to the Ravens and took over at left tackle during the season. The Ravens were pleased with Monroe and rewarded him with a five year $37.5 million deal.

However, Monroe has faced multiple injuries since signing the deal and his future is truly in question with the Ravens. He has missed a total of 15 games over the last two seasons, which he will use as motivation during his off-season training.

“No one likes to be hurt and not be on the field, but it is what it is, and I’ve had some things happen that just were unfortunate,” Monroe said. “I’ll make sure I continue to work my ass off and continue to get better.”

The Ravens had to move left guard Kelechi Osemele to left tackle in December. It was an idea they had contemplated before. Osemele had experience playing left tackle in college and has played well over the final four games of the season.

The team has flirted with the idea of keeping Osemele at left tackle, which could be a sign that they may move on from Monroe. Osemele is set to hit the free agent market and will garner plenty of attention from teams.

General Manager Ozzie Newsome addressed what went on behind the move at the Ravens season ending press conference.

“Left tackle is important to protect the blindside of the quarterback. When [Kelechi Osemele] agreed to move to left tackle, we thought it was a good thing for us to get a chance to watch him over the course of four games, and then also improve his value to the National Football League.” Newsome said.

Monroe has an $8.7 million cap number if he remains on the roster next season. The Ravens can save $2.1 million if he is released but the team will still be on the hook for $6.6 million in dead cap money. Newsome acknowledged that Monroe has played well when healthy, but the problem is keeping him healthy.

Monroe says that he is not concerned about whether or not he will be back with the Ravens next season and is focused on “getting healthy and back to playing ball.” He was placed on injured reserve and had shoulder surgery. This is the second time that he had surgery on his shoulder.

“This is unfortunately the second time I’ve gone through this shoulder deal, so I sort of know what to expect in terms of my rehab process,” Monroe said. “I’m fully confident that I’ll be healthy and back on the field.”

The Ravens will have the sixth pick in the 2016 NFL Draft. Some analysts predict Notre Dame left tackle Ronnie Stanley to be the Ravens’ selection. Investing such a high pick on left tackle would definitely be a sign that the team is preparing to move on from Monroe.

Monroe is set to work his way back from injury regardless of what happens with the Ravens. Putting in hard work is something that he is accustomed to during the off-season.

Last summer, he reported to camp with a noticeably leaner build. He will approach this off-season with a positive mindset as he works toward a more successful season in 2016.

“I’ve had some time to look at my game and how I’ve improved from the year before,” Monroe said. “I’ve made major strides. I’ve played some pretty good ball and I’m looking to build off of that.”