African-American Festival to feature Common, Angie Stone and others 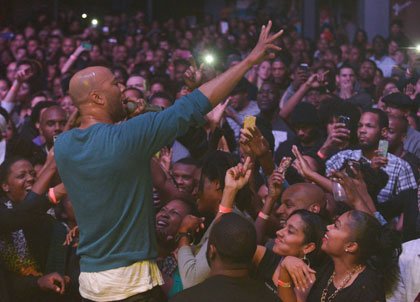 The African American Festival takes place on Saturday, July 2 and Sunday, July 3, 2016 at Camden Yards Sports Complex between lots B&C in downtown Baltimore. This year, popular hip-hop star and actor Common headlines the bill with Angie Stone, Joe, Mary Mary and others. For more information about the festival and a complete line up of entertainment, visit http://www.africanamericanfestival.net. (Courtesy photo)

Last year, Stephanie Mills and Doug E. Fresh were the primary attractions at the annual African-American Festival in Baltimore.

This year, festival producers may have one-upped the 2015 event. Popular hip-hop star and actor Common headlines the bill with Angie Stone, Joe, Mary Mary and others. The festival will also include a special tribute to the late icon Prince.

“We live in one most of the exciting cities in the country, and we’re going to have the chance to showcase that this summer,” Baltimore Mayor Stephanie Rawlings-Blake said.

“I love the opportunity to show off all that is Baltimore.”

Presented by Black Enterprise, produced by greiBO Entertainment and hosted by Rawlings-Blake, the festival is an annual celebration of life, music, and culture, according to publicist Nika Watkins.

It includes performances, empowerment seminars, and something for festival-goers of all ages. Also, the festival counts as the largest cultural festival on the East Coast as Charm City has welcomed more than 350,000 attendees each year.

The annual festival, which takes place on July 2 and July 3, 2016 at the Camden Yards Sports Complex between lots B&C, also will include the Community Connection, an area with obstacle courses and team-building exercises that’s geared to create bonds between the city’s youth and the Baltimore Police Department, producers said.

Sponsored by Visit Baltimore, Xfinity, Music Choice, the U.S. Army, Shoprite, TV One, the Baltimore Times and others, the festival also will include a health and wellness pavilion; a beauty bar; and a culture tent, where attendees will have the chance to research their genealogy and experience African traditions.

The event is free to attend and organizers will have more than 150 vending booths and attractions to go along with two stages of entertainment. In addition to the mayor, hosts will include actress Vivica A. Fox; Jonathan Slocumb, Brave and Maurette Brown Clark.

On Sunday, Ex Music takes the stage followed by Anthony Brown & Group TherAPy. Mary Mary, Joe Maye, Estelle, and the tribute to Prince kicks off the entertainment with Common serving as the headliner.

At a news conference announcing the lineup, Rawlings-Blake revealed just how much of a fan she is of the rap superstar.

Reportedly, when the crowd at the news conference expressed particular excitement over featured artist Common, Rawlings-Blake said she was excited to have the musician and human rights activist on the main stage. She also mentioned that he’s not too bad to look at either.

Among the new experiences this year will be “BrownGirl Village,” a tent that will host photo sessions, charm classes and entrepreneurs.

Inside the tent, showcases will include hair care, etiquette and fashion tips for young ladies as well as celebrity guests and a teen makeup artist who will be onsite to assist young women with beauty tips.

A Culture Village, where attendees can experience a world of cultures from Africa to the Caribbean and beyond, will also be included. Producers have also included an Empowerment Tent, which they say will be a focal point of this year’s festival.

“It’s a commercial for our city,” Rawlings-Blake said. “And people get a sense of what we’re about and they want to be here to enjoy us.”

For more information about the festival, visit http://www.africanamericanfestival.net.