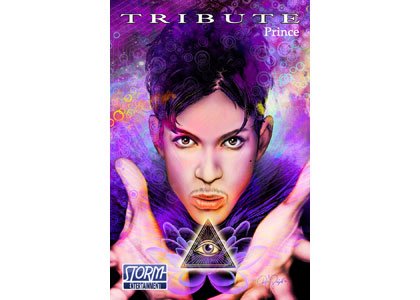 Storm Entertainment released the comic book entitled, “Tribute: Prince” in memory of the superstar entertainer who died on April 21, 2016. The 24-page publication was released on his birthday, June 7th. (Courtesy Photo/Storm Entertainment)

Toxicology tests for Prince concluded that the entertainer died from an accidental overdose of Fentanyl, a powerful opioid painkiller.

“I grew up listening to Prince,” said Storm Entertainment Founder and Publisher Darren G. Davis. "I hope readers come away with not simply a sense of the richness of his life, but how he influenced practically every artist that came after - regardless of genre.”

The comic book, which is written by Michael L. Frizell, chronicles the story of Prince’s life and features art by Ernesto Lovera and Vincenzo Sansone. The special edition comic book features three collectable covers by Sansone, Frizell, and Pablo Martinena.

“People really love the Prince comic book,” said Davis. “The comic book tells the story of Prince’s life up until the day he dies. My ultimate goal is for people who didn’t know Prince’s legacy and music to get to know him, and for those who were familiar with his legacy to have a different way of mourning him. Since this is a comic book, it’s visual and different. That makes this tribute even more special.”

According to Davis, the “Tribute” series serves as a pop culture companion to Storm Entertainment’s successful “Female Force,” “Political Power,” “Orbit,” and “Fame” series. The biography comic form allows Storm’s talented writers to delve into the history of certain newsworthy figures and explore what shaped them. Storm Entertainment’s biographical comic books have been featured on CNN, The Today Show, FOX News, in People Magazine and other news outlets.

Davis is 47, and says he grew up listening to Prince’s music and is a longtime fan. Prince's early music career saw the release of Prince, Dirty Mind and Controversy. Later albums released by the seven-time Grammy Award winner included 1999, Purple Rain, Diamonds and Pearls, The Gold Experience and Musicology.

“We have been doing biographical comic books for about four years now,” said Davis. “We initially featured politicians, but started doing biographies and then moved into celebrity comic books. We did a Michael Jackson tribute, and Michael Jackson’s family really loved it. We wanted to do a Prince tribute that tells his life story that his fans would be happy with.”

As one of the top independent publishers of comic book and graphic novels, Storm Entertainment unites cutting-edge art and engaging stories produced by some of the publishing industry’s most exciting artists and writers. Its extensive catalog of comic book titles includes the bestsellers “10th Muse” and “The Legend of Isis,” complimented by a line of young adult books and audiobooks.

According to Davis, “Tribute: Prince” will only be available for a limited time.

“This is a one-time shot,” said Davis. “There is a cap on the number of copies we are doing, so we are encouraging people to get copies while they are still available.”