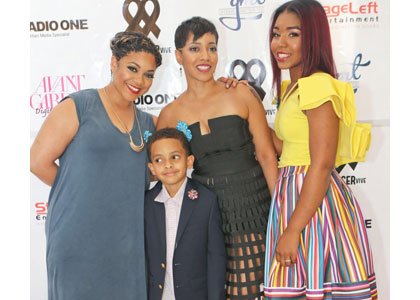 Mia Wright (middle); her sister Shari Hill (left); her nephew Santana Loudermk; and her daughter Bria Hill. They were all models in the 2nd Annual Cancer Awareness Fashion Event for We CAN-CER vive!®, which was held on June 11, 2016. Proceeds from the event will go directly toward assisting cancer patients and survivors. (Photo: Marcus Bennett)

Mia Wright can confidently look a person who has received a terminal cancer diagnosis in the eye, and tell them that she knows exactly how they feel. The 39-year-old from Largo, Maryland beat ovarian cancer three times.

The nonprofit recently celebrated its one-year anniversary at the 2nd Annual Cancer Awareness Fashion Event on June 11, 2016. Proceeds raised from the event that will go directly toward assisting cancer patients and survivors.

Trina Taylor, 43, from Baltimore is fighting stage IV colorectal cancer. Her 14-year-old son Kamron O’Banner is her biggest inspiration to keep fighting. Taylor received a makeover for the fashion event and walked in the fashion show. She has referred cancer patients to WCV.

“I think that people should chose to support it because specifically, the name speaks for itself, and we can survive anything that we are faced with if we have the right attitude,” Taylor said. “I think that We CAN-CER vive!® is just a great resource, and Mia being the person who is the founder of that— her spirit, her motivation, her will to live and to overcome is infectious— as far as getting other people onboard and helping people that are less fortunate in their cancer journey.”

Wright’s own cancer journey was paved with up and downs. She was originally diagnosed with Stage 1 ovarian cancer in 1999 then had a reoccurrence in 2007. Wright was informed in 2013 that she was terminally ill and had less than six months to live. A chemo cocktail and radiation treatment did not work. Wright’s research led to her discovery of a FDA approved drug called Avastin, but it was only approved for treating colorectal cancer, and her insurance provider would not pay for the treatment.

Wright located a doctor working at the Baylor T. Boone Pickens Cancer Hospital in Texas who had access to the drug. She received free treatment for nearly nine months, because the doctor needed a qualified ovarian cancer patient to participate in a clinical trial. However, the blessing often felt like a curse.

“I took on the look of a very sick, dying person. It was really, really hard before the turnaround came, and I got better and I was able to come home,” Wright said.

Today, Wright assists people who need support with clinical trials. She also takes cancer patients to appointments, picks up prescriptions and grocery shops for them. Even her parents, Glenda Hill and Jerry Hill who did as much as they could when she was fighting cancer, remain active in her organization. Jerry even pitches in by mowing lawns.

“A lot of times people think all we (WCV) needs is donations, when they decide to give back, but we do need volunteers as well,” Wright said, explaining that volunteering can be a one-time effort.

Wright, who is a mother of two daughters, says a cancer diagnosis often comes with financial strain.

“Even if you have the best of insurance, there are still expenses that are associated medical wise. Sometimes you find yourself in a position where you’re out of work for a long period of time, and if you’re out of work, you don’t have money,” Wright said. “A lot of people automatically assume that if you have cancer you automatically get disability. That is a myth. That is a lie. Even in a terminal state, I was denied disability.”

Anthony Watkins’ mobile wine and spirit company, Love Libations, provided Sweet Love Sangria for guests who attended WCV’s annual fashion event. A few models who walked in the show, and who are battling cancer, are good friends with Watkins. The Baltimorean says that seeing a large number of people in one place who are dealing with something like cancer is a reminder that anyone can be diagnosed with it.