Rio police tell tourists they won't be able to protect them

They're protesting over pay and conditions 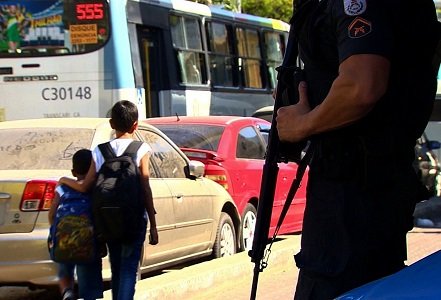 The Olympic Games are just 31 days away -- and Rio de Janeiro is in crisis. Violence is on the rise and police officers are at loggerheads with the government after claiming they've not been paid for months.The message from police to tourists is clear: We won't be able to protect you. (Photo: CNN)

RIO DE JANEIRO (CNN) — The Olympic Games are just 31 days away -- and Rio de Janeiro is in crisis.

Violence is on the rise and police officers are at loggerheads with the government after claiming they've not been paid for months.

The message from police to tourists is clear: We won't be able to protect you.

The state's police officers vented their anger last week with a sign saying "Welcome to Hell" outside Rio airport. "Police and firefighters don't get paid, whoever comes to Rio de Janeiro will not be safe," the sign said.

And it's not just those from abroad who are in danger -- the locals are losing patience too.

That's the harsh reality in the favelas around Rio, according one resident, as the city gears up to host the 2016 Olympics amid increasing concerns over police brutality and their ability, and desire, to keep people safe.

"It seems like there is an order [from authorities] to put fear in people so they stay calm, so they don't cause trouble in the city because the foreigners can't see that the city is chaotic," Higor da Silva, a resident of the Mare favela, told CNN.

"They [state police] don't care if there is a child in the middle -- they shoot their target."

State security officials told CNN that they have taken measures over the years to expel officers who use excessive force and say they have decreased the use of heavy weapons.

Rio de Janeiro mayor Eduardo Paes told CNN earlier this week the state was doing a "terrible" job in regard to security in the lead up to the Games. "

It's completely failing at its work of policing and taking care of people," he said.

The 2.9 billion-real bailout (roughly $850 million) was made available last week, after acting governor Francisco Dornelles said Games could be a "big failure" without the funds. It's believed that the back pay will be distributed this week.

"We are numbers, nothing more," one officer, who wished to remain anonymous, told CNN.

"You encounter a drug trafficker armed with lots of ammunition and you only have only 20 bullets. It is absurd."

The two officers, interviewed by CNN on condition of anonymity, said that the city's scant resources are used to patrol tourist hotspots such as Copacabana instead of Favelas where the criminal gangs run the streets.

They have risked speaking out because they say they've watched their fellow officers die to preserve Rio's image -- not to protect its people.

According to figures from Brazil's Public Security Institute published last week and distributed by Amnesty International, there were 40 people killed by on-duty officers in May alone -- 17 people were killed by police during the same period last year.

Last year, at least 307 people were killed by police in Rio -- a figure which accounts for one in every five homicides there, according to Amnesty.

According to the figures, 645 people were killed by police in the state in 2015, and many of the victims were young, black men from favelas and poor communities.

"Brazil has one of the highest levels of homicides in the world, with around 42,000 people killed with guns every year," Atila Roque, Amnesty International's Brazil director, said in a statement.

"Those living in the most marginalized areas of the city are disproportionally affected by this crisis."

When Brazil hosted the World Cup in 2014, police in the state of Rio de Janeiro killed 580 people, a 40% increase on the previous year, the rights group said.