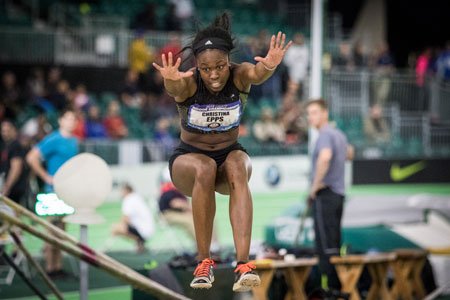 The feelings are still difficult to describe, but Christina Epps, a thrilled beyond words Coppin State University Graduate is on her way to compete in the 2016 Summer Olympics in Rio.

“I really can’t describe how unreal this is,” said Epps, a 2014 graduate who also serves as an academic advisor for the university’s athletic department. “I’ve always asked, why me? Why do I struggle so much and finally, I stopped saying it and I just competed and had faith that this is my purpose.”

Last week, in Eugene, Oregon, Epps competed in the triple-jump finals of the U.S. Olympic trials. Epps thought she had aced the first jump, but it was deemed a foul.

Her second jump was also ruled to be a foul and her outlook appeared grim as she failed to reach the qualifying standard after four more jumps.

Just prior to her sixth attempt, Epps said the tension was so thick that “My stomach was dropping. I had butterflies and I was just like, ‘Please just let it be 14.15m.’ I think I can go further. I’m excited.”

At last, Epps qualified, joining two other women which makes for the first time in 20 years since the United States has sent three ladies at one time to compete in the triple jump in the Olympics.

Keturah Orji and Andrea Geubelle also qualified in the triple jump for the U.S Olympic Team.

“Being the first Olympian of the best HBCU on the planet, my alma mater, Coppin State means the world to me,” Epps said. “I hope I’ve not only made my school proud but have inspired my fellow Coppinites to know that it doesn’t matter where you come from or what other people are doing, but with God, the right mindset, hard work, and dedication anything is possible.”

Epps says she will head to Rio on August 3, 2016. The Olympic triple jump competition is currently scheduled to start August 13 at 9:40am.

In the meantime, the 25-year-old continues to train at Coppin State where she said she’s guided by her former collegiate coach, and Interim Athletic Director of Coppin State University Alecia Shields-Gadson.

“She showed up and God showed out. It is such an honor to represent your country, your family and Coppin State University,” Shields-Gadson said in a statement. “This has truly been a journey and Christina has persevered and is reaping the benefits of the hard work, sacrifices, and discipline it takes to be a world class athlete. We are still taking it all in, but that will be short lived as its back to Coppin to resume training.”

Epps also credits the support of her family, particularly her mother who shouted when she heard that her daughter had qualified for the Olympics.

“My mom is always praying for me. When she found out she was screaming on the telephone and my family has been sharing all of the articles about this on social media with all of my pictures,” Epps said.

Admittedly, she’ll have to overcome nerves as the Games approach. “It’s the Olympics, so butterflies and being nervous are natural,” Epps said. “I have hardly slept lately.”

A former standout basketball player, Epps said the Olympics became a dream, as she grew a little older. She once thought she would make it as a basketball player, but it was Shields-Gadson who made her believe in her abilities in track and field.

With unwavering confidence, Epps rallied in Oregon to make the team.

“My experience at U.S. Olympic trials was an amazing experience, something I can’t describe in words,” she said. “It was my first trials and definitely one I will never forget. I’ve been chasing the dream of making an Olympic Team since 2012, when I tore my ACL. Watching the 2012 Olympic Trials at home when I was injured made me realize how much I had taken my talent for granted and motivated me to work harder to achieve my goal of making an Olympic Team.”