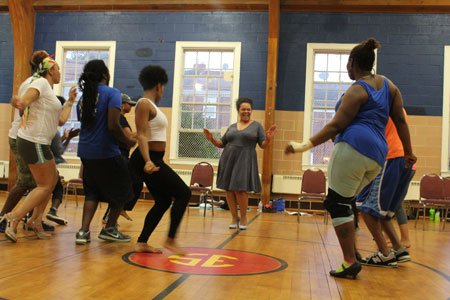 Crystal Freeman (gray dress) who portrays Effie with other cast members in rehearsal for upcoming performances in ArtsCentric’s production of "Dreamgirls." Courtesy Photo/ArtsCentric

The slogan for the 35th anniversary celebration of the award winning musical “Dreamgirls” is as captivating as the actors in the show.

“Stars rise and fall, but dreams live forever,” is how producers are billing the ArtsCentric presentation of one of Broadway’s most soulful musicals which opens in Baltimore for a near two-month run beginning July 22, 2016, at Motor House on North Avenue.

“Audiences can expect to see a resounding tribute to the powerhouse show that is ‘Dreamgirls.’ This year is the 35th anniversary of the show opening on Broadway and we plan to celebrate that in a monumental way,” said Cedric D. Lyles, the show’s musical director and managing director of ArtsCentric, the Baltimore-based color-conscious organization committed to re-examining traditional roles in the arts, advancing original stories of minority cultures, and fostering educational advancement to strengthen the community through the power of theater.

The principal cast features some familiar soul-stirring voices including two, who are sharing the role of Effie White; Crystal Freeman, a veteran of such shows as “Sincerely, Men,” and “The Color Purple,” and LaTisha Hamilton, who also appeared in “The Color Purple.”

ArtsCentric also plans to roll out some new faces including Alana Linsey as Lorrell Robinson, Tevin Brown as C.C. White and Tonnia Boykins as Michelle Morris.

“This cast is beyond amazing,” Lyles said. “They were so amazing we had to use the (two characters portraying Effie White) both. They will be alternating nights, so if you like one come back another night to see the other,” he said.

In what producers described as full of onstage joy and backstage drama, the sensational new production of “Dreamgirls” tells the story of an up and coming 1960s girl singing group, and the triumphs and tribulations that come with fame and fortune.

With music by Academy Award nominee Henry Krieger and the book and lyrics by Tony Award winner Tom Eyen, “Dreamgirls” features the hit songs, “And I Am Telling You I’m Not Going,” and “One Night Only”.

“The choreography by Shalyce Hemby is amazing. She’s really brought out her finest work …and they are some of the best singers and dancers in Maryland,” Lyles said. “We’ve spared no expense for this show. I promise it will be a mind blowing experience.”

Audiences will be treated to live singing by the cast during the show which will take place on a thrust stage allowing those in attendance to sit closer and see it from three different sides.

“The response to the announcement of this show has been amazing,” Lyles said. “We have already sold out a couple shows and others are more quickly filling up as well.”