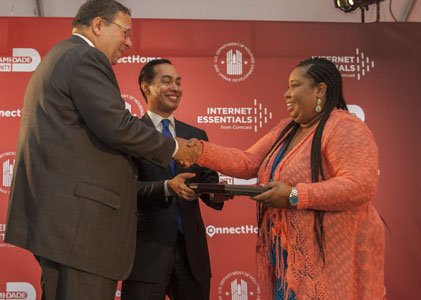 Comcast has taken an historic step towards closing the nation’s digital divide. The global and media giant recently announced that public housing and HUD-assisted residents living in Comcast’s service area are eligible to apply for Internet Essentials. Comcast estimated that up to 2 million HUD-assisted homes, will now have access to low-cost Internet service.

“This announcement reaffirms Comcast’s determination to make a meaningful impact to close the digital divide for low-income families in this country,” said David L. Cohen, senior executive vice president and chief diversity officer of Comcast. “This is the single largest expansion of the Internet Essentials program in its history, and we’re thrilled to be working with HUD to help connect even more families, including seniors, veterans, and adults without children, to the transformative power of having internet service at home.”

According to Comcast, the extension means all households that receive HUD housing assistance in Comcast’s service area, whether seniors, single adults, veterans, and married couples without children, can apply for low-cost Internet and ultimately help better their lives.

“The national expansion to HUD-assisted resident’s announcement marks the ninth time in five years Comcast has expanded eligibility for the program, and underscores the company’s commitment to attacking the digital divide,” said Cohen. “We have made many enhancements, but never a more sweeping change than this one. Previously, a family with a child who received free or reduced price lunches was eligible. Now, any resident of public housing or who receives public housing assistance is eligible regardless of whether they have child in the school lunch program or not.”

Cohen stressed that the expansion seeks to provide a meaningful contribution to closing the digital divide for low-income Americans so they can improve the quality of their lives, get a GED credential, take online classes, search and apply for jobs, and learn to be digitally literate so they are more marketable for 21st century, higher paying, digital jobs.

“ConnectHome is opening doors of opportunity for our next generation of Americans,” said HUD Secretary, Julián Castro. “Today’s announcement has the potential to transform the lives of hundreds of thousands of kids across the nation by giving them the tools to reach their full potential. We’re grateful to Comcast for joining the ConnectHome initiative, which has extended its reach to more than 1.5 million children in one short year.”

ConnectHome is an initiative to extend affordable broadband access to families living in HUD-assisted housing. Through ConnectHome, Internet Service Providers, non-profits, and the private sector are offering broadband access, technical training, digital literacy programs, and devices for residents in assisted housing units in 28 communities across the nation.