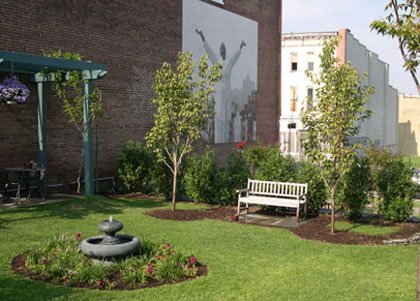 An abandoned lot at the corner of Pennsylvania Avenue and Presstman Street was transformed into the Choose Life Memorial mural and garden in remembrance of lives lost to drug addiction and violence in the community over decades. The space is open to the public. (Courtesy photo)

Politicians, local officials and even Mayor Stephanie Rawlings-Blake are among the more than 100 people expected to gather for an open house on Thursday, July 28, 2016, at the Harris-Marcus Center on Pennsylvania Avenue to celebrate the 20th anniversary and success of the nonprofit organization, Intersection of Change.

“This is important to our community and we want people to understand what is taking place on Pennsylvania Avenue where just one year ago there was unrest,” said Todd Marcus, the executive director of Intersection of Change, the nonprofit that’s hosting the open house and celebrating its 20th year serving the Sandtown-Winchester and Upton neighborhoods with innovative programs and community development projects that have proven vital for residents, businesses and others.

Intersection of Change, formerly Newborn Holistic Ministries, has been working to change city neighborhoods through programs like Martha’s Place and Jubilee Arts. The organization’s work has been critical in revitalizing the 1900 and 2000 blocks of Pennsylvania Avenue as they’ve renovated dilapidated structures and vacant lots, in part, by organizing mural projects, green space creation and hosting special events.

“I have lived and worked in this neighborhood for 20 years and it feels good to know that despite the many negative stories about Baltimore, our organization continues to do important work and has shown the possibilities of how we can really make a difference in the daily lives of our community members,” Marcus said.

In a news release, the organization noted some of its significant accomplishments have included the full renovation of six previously vacant and dilapidated buildings; the transformation of 18 vacant lots into community green spaces and gardens; the creation of 12 neighborhood murals; the opening of Jubilee Arts in 2009 in a formerly vacant building and creation of community based classes in visual arts, dance, ceramics and business. Jubilee Arts has grown from 15 classes in 2009 for adults, seniors, families and children to more than 30 current classes.

The opening of Martha’s Place 16 years ago was the result of the overwhelming epidemic of drug abuse in the community and the desire to help women in their own communities. Marcus said the recovery rates for Martha’s Place now far exceed national trends.

“This anniversary year affords us an opportunity to tell our story and thank the many people who have helped us along the way,” Marcus said. “There is still a lot of work to be done but we remain committed to serving our community, doing more work, and showing the hope and potential of our neighborhood.”

As the organization looks to the future, they are incorporating several themes into a new vision for 2020 to include the programs like “Championing Freedom,” which offers addiction care and treatment to another 150 women.

Intersection of Change officials also plan to engage more than 100 teens in a “Youth in Business” class to help them become entrepreneurs.

They also plan a “Cultivating Beauty” program by creating ten new community murals and employing community members and Baltimore artists in community development and a “Fostering Creativity” initiative in which the organization will provide art classes and community art projects to 10,000 youth and adults.

The nonprofit has also scheduled four fundraisers this year that’s aimed at raising money while celebrating their anniversary, Marcus said.

“The community response has been very supportive,” he said. “This is very important to the community. The open house affords everyone, the mayor, council and others who have been supportive of us, an opportunity to come out and see what we’re able to do.”