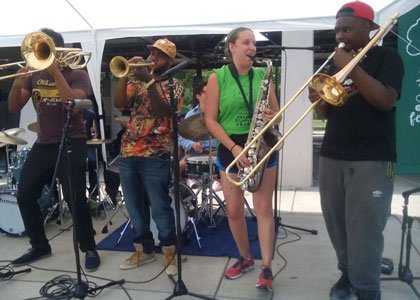 Musicians who mentor members of the OrchKids program provide the entertainment at the OrchKids Green Festival (Photo: Deborah Bailey)

Started in 2015, the festival serves as a way to bring diverse cultural access, community-awareness, and local Baltimore musical talent to the often-neglected West Baltimore community. 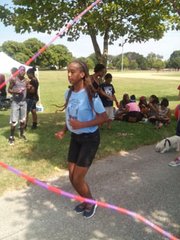 OrchKids is a year-round, during and after school, music program designed to create social change and to nurture promising futures for youth in Baltimore City neighborhoods.

“Today we have a lot of teachers and guests artists who come during the year [to] coach the kids and give them help,” said Khandeya Sheppard, site Manager for Booker T. Washington OrchKids Program. “The best part of OrchKids is working with the kids… [they use] music to express themselves and set goals for themselves in life.”

More than 1000 Baltimore youth are involved in music and enrichment activities during and after school at OrchKids sites at Baltimore Public and Charter Schools— Highlandtown; Lockerman-Bundy and Mary Ann Winterling Elementary Schools; and Booker T. Washington Middle School for the Arts.

“I believe passionately that music has the power to change lives, and the BSO should lead the movement,” said Marin Aslop, BSO Director and OrchKids Founder. “Since coming to Baltimore, one of my priorities has been to create a school program that combines music and mentorship to have a positive impact on Baltimore City youth.”

Based on the premise of community revitalization, The OrchKids Green Festival began with a volunteer-based, street beautification and litter pickup in West Baltimore on Saturday morning. Volunteers were accompanied by live music as they traveled through the city collecting bags of trash.

“It’s really a festival for the community by the community, and it’s beyond time to start bringing real investment into West Baltimore. We already do this every day through the OrchKids program and have been for the past eight years. Why not also lead the trend in making it an attractive spot to host a music festival?” said Camille Delaney McNeil, OrchKids Senior Site Manager.

Takeia Hinton, one of the vendors who braved temperatures in the high 90’s to support the OrchKids festival has two children who have been involved in the BSO’s Green Festival since it started last year. She believes in the value OrchKids offers children and the community.

“The program displays the hard work of children and is a positive outlet for the kids. This is also something positive for the schools and community,” Hinton said.

“We have bigger numbers than we had last year. We have more community members and not just our own OrchKids staff and family,” McNeil said, “We are hoping the more years we do this we’ll get more and more community support, more funding and we’ll really make this a substantial festival.”