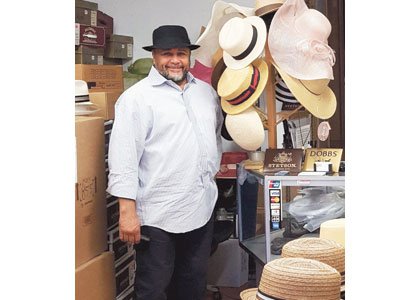 It’s nice to have windows! That’s the first thing Clyde Davis-El said when he learned that he was one of three Baltimore business owners selected to receive a $10,000 grant to renovate their storefronts.

Earlier this month, Davis-El, owner of Main Street Hats was named as a finalist in a competition hosted by Wells Fargo, the National Urban League and the architect-design firm Gensler. The award comes just a couple of months after Wells Fargo and the NUL announced the “Wells Fargo Works for Small Business: Neighborhood Renovation Program,” which is designed to help improve Baltimore small businesses through a business renovation contest.

Through the “Wells Fargo Works for Small Business: Neighborhood Renovation Program,” eligible Baltimore small business owners will have the opportunity to compete in a contest in which three finalists will each win $10,000 to renovate their businesses and will receive workshops and training from the Greater Baltimore Urban League’s Entrepreneurship Center Program.

Gensler will collaborate with the three finalists to make physical renovations to the interior or exterior of their businesses.

To qualify, small business owners had to respond to essay questions about their business.

A panel of judges then named three finalists. From those finalists, judges will select the best business renovation design, and the winner, who will be announced on Aug. 1, will receive a reception at their business.

The public will also get to vote for the best renovation design, and the winner of the public vote will be announced on August 6, 2016, at the National Urban League’s annual conference in Baltimore.

“Wells Fargo has a long history of community partnerships in Baltimore, and through the Wells Fargo Works for Small Business: Neighborhood Renovation Program we are able to continue helping our economy and community thrive.”

For Davis-El, who left his job at a steel mill to open his hat store, it means windows for the Greenmount Avenue store he opened in 2009.

“I’ll be able to put everything on display. Finally, my hats will be where people can see what I have and then they can come on in,” he said.

It was by chance that Davis-El opened the business. “I absolutely never thought of opening a hat store because I’m more of a technical person, working for a steel company, not this,” he said. “So, what happened was that I took a cruise and I came back with some panama hats and everybody wanted to know where I got them so I bought the store out and was selling them to some friends. And then more people started wanting them so I got to the point where I had so many hats in the house my wife told me I had to get them out of there.”

In 2006, Davis-El bought the first half of 3019-21 Greenmount Avenue and a year later, he purchased the second half. He began replacing floors and walls but, until now, he never had that window he so desperately needed for his vast collection of Stetson, Dobbs, and Biltmore hats.

“I just put the front window in on one side and I am starting new façade improvements because the city, Johns Hopkins, Main Street Maryland Program and the Baltimore Development Corporation contributed matching grants to get this done,” Davis-El said.

“It’s so exciting for me and for my customers,” he said. “You can get any kind of hat here.”