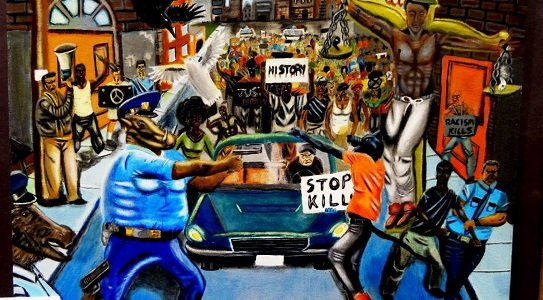 Congressional art competition entitled, “An Artistic Discovery,” features a nationwide art contest coordinated by members of the U.S. House of Representatives. The contest recognizes the talents of high school students across America. Over 200 Members of Congress and over 50,000 high schools students have taken part in the popular and competitive program.

Inadvertently, the annual art contest has become a reflection of what’s on the minds of young people in America.

Pulphus’ work is an acrylic painting featuring a downtown street scene with the St. Louis’ iconic arch displayed in the background and three police officers with animal heads, two with guns in hand, and a large group of marchers approaching moving toward the police. The lead marcher carries a sign that says the word “history.” Pulphus’ painting includes several signs, one of which says “Racism Kills,” and another reading “Stop Killing.” On the right you can see man being crucified wearing a graduation cap holding the scales of justice in his hands.

Pulphus,’ “visually stunning acrylic painting on canvas entitled, “Untitled #1” will be displayed at the U.S. Capitol Complex. Pulphus will travel to Washington, DC, courtesy of Southwest Airlines, to unveil his winning entry. The painting portrays a colorful landscape of symbolic characters representing social injustice, the tragic events in Ferguson, Missouri and the lingering elements of inequality in modern American society,” read a May 6, release from Rep. Clay’s office.

During an interview with the NNPA News Wire, Rep. Clay was asked about Pulphus’ work. The Congressman will greet the artist in Washington, D.C. and be present with Pulphus,’ when the painting is presented for display in the U.S. Capitol complex.

“I think that the art work selected for this year — winner of the Congressional art competition has to be the most creative expression that I’ve witnessed over the last 16 years,” Rep. Clay said between votes on the House floor.” I’m very proud of the young man who is the artist responsible for this work he depicts the St. Louis community in the way he envisions it. I respect that and I’m so glad that the judges picked his work number one as the winner.”

Pulphus’ work will travel to Washington, D.C. in a few weeks where he will attend a reception for all of the winners around the country. This year’s first place winner will receive a scholarship, according to Rep. Clay’s office.

The contest is in its 32nd year and this is the 16th year that Congressman Clay has conducted the competition in Missouri’s first Congressional District.

Lauren Victoria Burke is a political analyst who speaks on politics and African American leadership. She can be contacted at LBurke007@gmail.com and on twitter at @LVBurke.