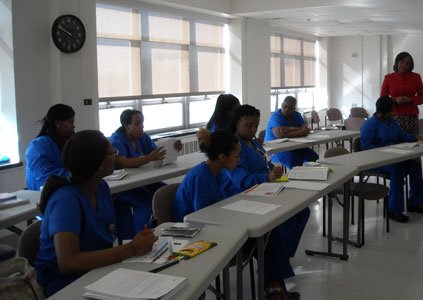 Veronica Elder from PNC Bank in a classroom with students at the Caroline Center where she teaches about saving, student debt, credit issues, direct deposit and provides other financial literacy information. Elder has worked for PNC Bank for 23 years and is grateful for the opportunity to volunteer at the Caroline Center. (Courtesy Photo)

Since opening its doors, more than 1,500 women have taken part in the Caroline Center’s various programs, including certified/geriatric nursing assistant and pharmacy technician.

These programs provide students with an added advantage in obtaining employment upon graduation. The center’s primary mission is to educate women who are experiencing unemployment or those who desire to leave low-wage jobs for meaningful careers with advancement opportunities, according to center officials.

“These women that attend the Caroline Center are strong, brave and courageous and they just need chances,” said Executive Director Patricia McLaughlin said. “They need someone to care and they can achieve whatever their dream is and we’re here to help them to do it.”

For Monica Conner, the chance to enroll into the Caroline Center was one she just couldn’t pass up.

Conner, a single mother of four young boys, never understood the meaning of taking time for herself – which also meant avenues to better herself were nearly nonexistent.

“I had a couple of friends who attended the Caroline Center and they told me about all of the benefits. I have four boys, who are six, four, two and seven months old and things can definitely be overwhelming at times but the Caroline Center was able to provide me with the support I needed to complete my studies,” said Conner, who graduated on April 15, 2016.

Since 1996, the workforce development center has been collecting hundreds of applications every few months for the center’s nursing assistant program and its pharmacy technician program, McLaughlin said.

Upon graduation, the center does its best to assist students in finding suitable employment. They also help prepare those graduates who seek more education.

“I think it’s been successful because the structure which includes not just giving women certification but providing all the wrap around services that really enhance her life so she can be a really good employee,” McLaughlin said. “We train nursing assistants for instance, but we also provide counseling services, full time social workers, financial literacy, basic math, anatomy and physiology as well as writing resumes. We have strong employer connections waiting for women to graduate and it all comes together.”

McLaughlin also praised the contributions of PNC Bank, whose employees play a vital role in providing financial counseling, training and support to students on a weekly basis.

“The financial situation many women find themselves in is sometimes beyond belief,” McLaughlin said. “But, we have been blessed to have Veronica Elder of PNC teaching a course and she’s been amazing.”

Elder, whose two daughters have previously graduated the program with one going on to work in the pharmacy industry, provides thought-provoking and instructive lessons on student debt, credit issues, direct deposit and other financial products.

“This is my second class, my second semester and the curriculum here closely mirrors what we do at PNC,” Elder said. “We have printed material with the basics of borrowing and we teach what is a checking account and how you should pay yourself first.”

Elder, who has worked at PNC Bank for 23 years, said she is elated that her employer allows her to teach at the Caroline Center.

Among the reasons she’s been effective is because she rarely pulls any punches.

“I am a very outspoken person. I tell my own single mother and divorced mom story and how getting by on a bank salary can be done,” she said.

“I have the benefit of working around some very smart people at PNC and I’ve been a sponge here and have learned a lot,” Elder said. “Last month, as I was explaining things to my class a young woman said ‘that’s for you, not us.’ I told her that I’m here to make sure it’s for you and that [financial education] doesn’t take 25 years for you like it did for me. I didn’t have anyone to sit me down and tell me not to get a money order but to open a checking account. We didn’t have the benefit of the most efficient and cheapest way to pay our bills.”