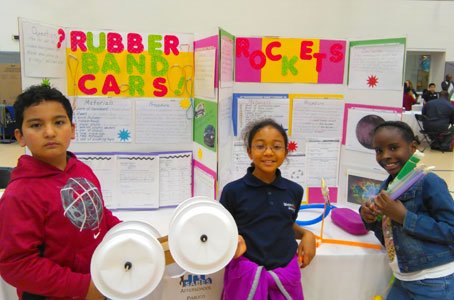 Fourth graders from Pimilico Elementary School (left to right) Krrish Strestha, Emily Griffin and Ayana Colbert participated in the spring STEM Showcase at Coppin State University in Baltimore on May 4, 2016, where they presented their projects: a rubber-band powered car and a rocket foot launcher.

With the advancements of overlapping disciplines— science, technology, engineering and mathematics— also known as STEM- has opened up exciting career fields for elementary school students.

Students from nine Baltimore City Public Schools participated in a STEM Showcase at Coppin State University on May 4, 2016. With over 50 different projects and nearly 800 attendees, the event celebrated the educational STEM achievements and student-driven projects during in-school lessons and after school programs.

“We recognize the amount of time and support that’s required to spotlight the STEM projects of our SABES students, and we applaud their achievements,” said Alisha N. Sparks, Elementary School SABES Program Manager at Johns Hopkins University Whiting School of Engineering.

Fourth graders Ayana Colbert, Ellen Griffin and Krrish Strestha from Pimlico Elementary School presented their STEM projects— a rubber band powered car and a rocket foot launcher. They created their projects in an after school STEM program with the US Dream Academy. Ayana’s presentation highlighted the engineering design process. She simulated the steps that an aerospace engineer would take while designing a rocket and launching it. Ayana says this was her first time participating in the STEM Showcase and had a great time presenting to both adults and her peers.

Krrish and Ellen showcased their rubber band powered car. With a piece of cardboard, small paper plates and two rubber bands – they designed a car that worked! They discussed how force, created by the rubber bands made the car move. They both attended previous STEM Showcase activities and said they looked forward to attending more events. Both Ellen and Krrish are interested in studying engineering.

According to Sparks, the SABES staff and partners have been collaborating for the last six months to plan the annual SABES spring STEM Showcase which incorporated the nine partner schools from three communities— Greater Homewood, Park Heights and Greektown/Highlandtown. One of the organization’s goals is to expose the students to

STEM careers so that they are globally competitive.

The event organizers were pleased to see the knowledge base of the students and their level of confidence in presenting their STEM projects. “The SABES STEM Showcase is a visual reminder to our students that they can do anything they put their minds to,” said Sparks.

Sparks says the STEM Showcase dispelled the myth that it’s ‘uncool’ to be smart.

“The SABES STEM Showcase shows students that everyone can succeed in STEM and bring innovative solutions to solve problems in their local communities,” said Sparks.