What made Muhammad Ali 'The Greatest'? 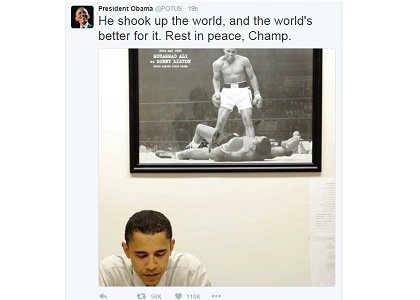 President Barack Obama and first lady Michelle Obama said in a statement that Ali "shook up the world." The President said he keeps a pair of Ali's gloves on display in his private study in the White House just under the iconic 1965 photo of Ali standing over Sonny Liston after knocking him out. (Photo: Twitter/@BarackObama)

"I am the greatest."

It's easy to say -- but much harder to convince millions of people around the world that you're right.

A conversation about Muhammad Ali could go on for hours before even beginning to touch on the sporting legacy he left in the ring.

His charisma, charm, quick wit and ability to turn a phrase were just some of the qualities that made him a truly global icon.

It says a lot about him that many sporting icons look up to Ali in much the same way as his hordes of "ordinary" fans.

"Muhammad Ali, when I started boxing, was one of my inspirations," Manny Pacquiao, another of boxing's all-time greats, told CNN after Ali's death was announced.

"I always admired him and I always thought 'This is my inspiration, why I am here in boxing.'

"We all know what he has done and accomplished. He's an inspiration to all boxers."

Pacquiao said Ali's death, at the age of 74, following years of ill health was "a big loss for boxing," but that his legend would live on.

"He passed away, but the memory of Muhammad Ali and his accomplishments we will never forget."

While mourning is inevitable when someone of Ali's stature passes away, it also has served as an opportunity to celebrate his life.

"Every fiber of his being was great," said David Haye, a fellow former heavyweight world champion.

"His personal and religious beliefs were so strong that he lost three and a half of his best years because of a decision he made not to go to Vietnam.

"At the time it was a very unpopular decision, he lost an amazing amount of his fan base, the American media turned on him but he stuck by it and years later people look back and think what an amazing stand.

"The fact that he believed so strongly about that, shows he wasn't only the greatest in the ring, he was the greatest outside of the ring as well."

Many boxing fans and journalists might tell you Ali isn't the best boxer in history -- that honor often goes to Sugar Ray Robinson. But comparing boxers across different eras and weight classes is a fruitless exercise.

Ali took on all challengers -- even when onlookers didn't give him a chance -- and beat most, recording just five losses over the course of his professional career.

Most laughed at the idea of a 22-year-old Ali defeating the fearsome and hard-hitting Sonny Liston, but that's what he did when the fighters met in 1964 -- and then again a year later.

But Ali's athletic achievements didn't define him -- they were just part of a package and it was perhaps what he did outside of the ring that turned him into the man we know.