Discovering the unexpected on the journey to empowerment: Young NNPA black scholars 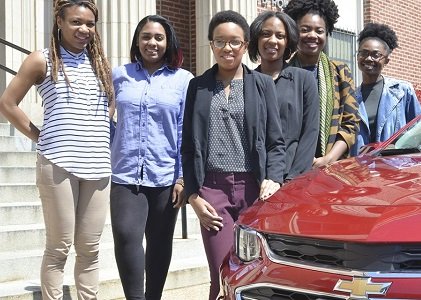 Thanks to the game-changing efforts and support of General Motors Chevrolet Malibu, the National Newspaper Publishers Association (NNPA) together with the Howard University School of Communications have launched “Discover The Unexpected” NNPA Journalism Fellows Program. (Freddie Allen/NNPA)

(NNPA) — The legendary scholar, writer and visionary James Baldwin once personally confided in me that he had come to know that the “power of the pen” for black people in America and throughout world was “truly transformative and irreversibly impactful on the consciousness of all those who cry out for freedom, equality and justice.” Baldwin’s prophetic words from the 1970’s are still true today.

We take note with pride that currently there are a growing number of young, gifted and talented journalists who are emerging on the campuses of Historically Black Colleges and Universities (HBCUs) and in the offices of our nation’s black owned newspapers and media companies. Baldwin’s audacity and legacy to write and speak truth to power are finding a new resonance among today’s young journalists.

Thanks to the game-changing efforts and support of General Motors Chevrolet Malibu, the National Newspaper Publishers Association (NNPA) together with the Howard University School of Communications have launched “Discover The Unexpected” NNPA Journalism Fellows Program.

Over the next several months in Detroit, Chicago, Atlanta, and in Washington, D.C., eight NNPA Journalism Fellows from the Howard University School of Communications will be working with NNPA member publishers to sharpen their pens and to files stories that capture and amplify the challenges, struggles, triumphs and realities of Black America in 2016.

This will be a program that will benefit the students, the university, the Black Press, and the African American community. We will have the opportunity to help shape the scholarly preparation of a new emerging generation of freedom-fighting print journalists and social media innovators.

Remember the names of these NNPA rising scholar fellows: At The Atlanta Voice newspaper are Brandi Montgomery and Brelaun Douglas; at the Chicago Defender are Briahanna Brown and McKenzie Marshall; at The Washington Informer are Victoria Jones and Rushawn Walters; and at the Michigan Chronicle are Tatyana Hopkins and Sidnee King.

MC Lyte is a global icon in hip-hop and popular culture. MC Lyte is an activist writer and pulsating orator, but she is also a scholar. MC Lyte not only endorsed the launch of the “Discover The Unexpected” with her motivating presence at Howard University with the NNPA and Chevrolet, she also is a tremendous living role model of what it means to use audacious talent, genius and commitment to promote positive social transformation and empowerment. We also note that MC Lyte founded and Chairs the Hip Hop Sisters Foundation that has donated thousands of dollars to scholarships for deserving students across the nation.

Learn more about Discover The Unexpected (DTU) at http://www.nnpa.org/dtu/and use the hashtag #DiscoverTheUnexpected on Twitter @BlackPressUSA and @NNPA_BlackPress.