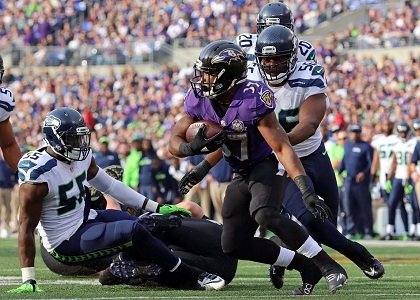 Baltimore Ravens running back Buck Allen saw plenty of play time after Justin Forsett suffered a broken arm against the St. Louis Rams last season. His versatility showed as he was used as a receiver out of the backfield as well as running Ravens zone scheme.

Allen only posted 514 rushing yards and averaged 3.8 yards per carry in 2015. With a few broken tackles, that number could easily have been greater.

“I actually looked back at that [on film] two weeks ago, and a couple games, I could have broken it, but a little shoestring tackle brought me down,” Allen said. “This year, that’s not going to happen. Me personally, that’s something I [have] worked on. [Running back’s] coach Thomas [Hammock] pointed it out to me. It’s something I worked on, and I’m ready for it.”

Allen said he has trained differently this year. Instead of getting ready for the NFL Combine, he trained for football specific duties in Tampa, Florida. Going into his second season in the NFL, Allen is more comfortable and confident as a player.

“[My] confidence is at a higher level— it’s high,” Allen said. “After going through your first year, seeing how fast the game is, seeing how a different team plays, you’re going to come back next year with confidence and more comfortable with the playbook. I feel like I’m in a great place right now.”

The extensive play time Allen received last season will only help him. He now knows what it’s like to bang in the trenches and run the football with physicality in the NFL. Learning how to always be ready and stay prepared to play was a lesson that he learned last season.

“I got my number called early— got out there to get in the mix and experienced some things. I learned that you’ve always got to be prepared, no matter what the situation is,” Allen said. “You never know when your number is going to get called— third-string, second-string— no matter what. It’s always an injury away. So, being prepared is the best way to be.”

As he prepares to enter his second season, Allen’s goal is to be explosive. The 3.8 yards per run average is something that he will need to improve if he wants to continue to be a regular in the Ravens rotation.

The Ravens have added a number of running backs to the stable this season. Trent Richardson was signed as a free agent. Kenneth Dixon was also drafted in the fourth round. Competition will be fierce.

The patience and vision that Allen picked up as he ran in the zone scheme at USC will need to continue to transfer to his time in Baltimore. The Ravens plan to run the ball more and spent their first round pick on Ronnie Stanley, a left tackle from Notre Dame.

Allen will get opportunities to carry the ball in 2016, but he will need to fully maximize each carry if he wants to improve upon his rookie season.