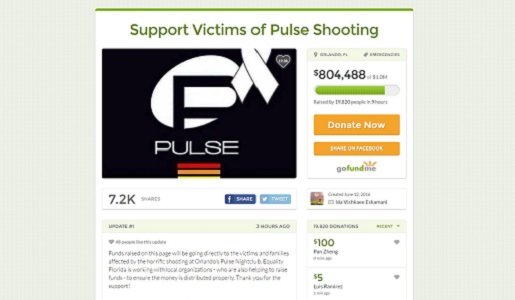 NEW YORK (CNNMoney) — A crowdfunding campaign to support the Orlando Pulse shooting victims and their families has pulled in more than $4 million.

The campaign is GoFundMe's largest ever, dwarfing the previous record of just over $2 million. The charity site was started in 2010.

Equality Florida, the largest LGBT rights group in the state, posted the GoFundMe fundraiser shortly after a gunman killed 49 people and injured dozens more at a gay club in the deadliest mass shooting in U.S. history Sunday morning. An earlier death toll of 50, released by officials, had included the gunman.

By Tuesday evening, more than 87,000 people had made contributions. That included a $100,000 donation from GoFundMe, which essentially waived its transaction fee.

Dan Pfeiffer, spokesman for GoFundMe and a CNN contributor, confirmed that the campaign for the Orlando victims was the site's largest ever.

"We are beyond moved by the support from all corners of the world and all walks of life," Equality Florida wrote. "We do not know the total costs for the victims of this horrific hate crime, therefore are working to raise as much as possible and disperse the funds as fast as possible."

Equality Florida is partnering with the National Center for Victims of Crimes, a nonprofit that helped distribute the proceeds from similar fundraisers after mass shootings in Fort Hood and Chattanooga, to distribute the funds.

The organization is asking victims to call the Victim Connect Resource Center's hotline to begin the process at 855-4-VICTIM or at chat.victimconnect.org.

The funds will be distributed to the families of deceased victims, those injured during the attack, and potentially anyone in the club during the shooting, according to NCVC executive director Mai Fernandez. Recipients will have full discretion on how to use the money -- such as covering funeral costs, medical bills and counseling.

Victims will get the money in about seven months, though Fernandez said the organization will attempt to deploy funds immediately for emergency situations.

She also warned donors to be cautious of where they contribute for the Orlando victims, adding that her organization will work with the FBI and local authorities to ensure that no fraudulent claims are made.

Apart from the GoFundMe initiative, donations can also be safely made directly to NCVC at NationalCompassionFund.org.

Ida Eskamani, one of five Equality Florida staff members based in Orlando, said the organization set up the GoFundMe page on Sunday morning shortly after receiving word of the shooting.

The group's initial fund raising goal of $100,000 was quickly eclipsed. Donations poured in throughout the day Sunday, bringing the fund to nearly $1 million in just 10 hours. On Tuesday, the group raised its goal to $5 million.

The vast majority of donations were for $1,000 or less.

Some of the sizable donations came from Cricket Wireless, which gave $25,000, and Executive Pride, an organization that aims to promote LGBT rights in the business community. It posted a $30,000 contribution on Sunday.

One of the earliest donors was singer-songwriter Jeffree Star, who gave $20,000.

"Our community and the rest of the world has spoken volumes by helping out, and it makes me feel less alone in a world where I'm not always accepted," Star told CNNMoney. He added that he has promoted the fundraiser to his 2.6 million Instagram followers and 626,000 followers on Twitter. "It's not about the dollar amount, it's about being a decent person and standing up for human rights."

Equality Florida is working with other organizations to coordinate vigils, counseling and blood donations. Equality Florida has a landing page with information about those services.

A different GoFundMe bid was launched June 11 to raise $4,000 for the family of singer Christina Grimmie, who was shot and killed in a separate incident of gun violence in Orlando on Saturday. That campaign had raised more than $128,000 as of Monday.